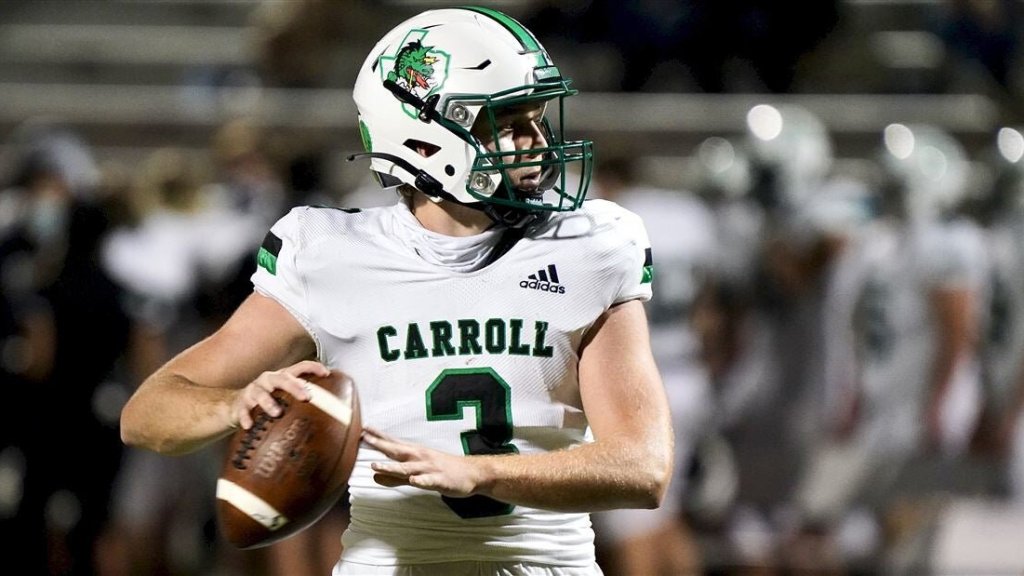 Southlake Carroll star signal-caller Quinn Ewers will skip his senior year of high school and enroll early at Ohio State to take advantage of NIL opportunities at the collegiate level. The news was first reported by Inside Texas managing editor Justin Wells.

Whispers that Ewers was considering forgoing his senior year of high school in favor of an early arrival in Columbus first started swirling last week. Ewers had just one more high school class to complete before he could graduate early and enroll at Ohio State and it now looks like he has enough high school credits in his back pocket to make the leap.

Ewers is the No. 1 overall recruit and No. 1 quarterback in the class of 2022, according to 247Sports. His scouting report reads:

Good height with a plus frame. Pro-style QB with athleticism and mobility that qualify for a dual-threat label. Elite improvisational QB who can extend plays and remain accurate on the move. Throws with a smooth, easy delivery and varies arm angles as needed. Impressive velocity and spin rate really show on routes over the middle and down the seams. Field-stretching vertical arm strength to consistently hit big plays over the top. Also shows encouraging touch on timing patterns and downfield routes that require it. Good runner by design or scramble. Understands how to protect himself as a runner and minimize shots. Shows encouraging pocket presence and awareness. Senses pressure and knows how to react to it. Also willing to stand and deliver under duress and will take a big shot if it means hanging in there to make the necessary throw. Occasionally will take risks, but that also is part of what makes him so good. Release quickness is good in general but could still quicken a bit at times. Elite QB prospect at the top of the 2022 cycle, at his position and across the board. Future impact high-major starter with long-term potential to be taken high in the NFL Draft.