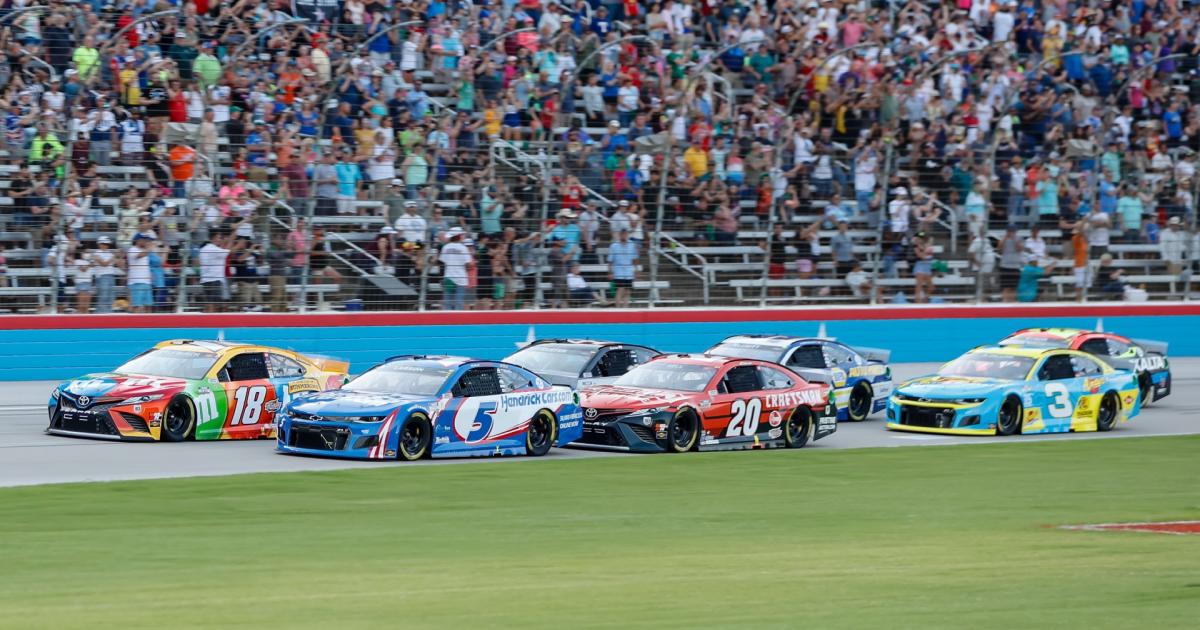 NASCAR tends to use its All-Star race to experiment with some new rules and procedures. They will certainly be doing that in 2022 with their new qualifying procedures.

On Saturday, NASCAR will host qualifying for its All-Star race. Some fans may tune in and expect to see it look like normal NASCAR qualifying, which features drivers running a few laps and the driver with the fastest time getting the pole position.

Something similar will happen on Saturday night, but instead of cars qualifying one-on-one, they will square off with one another in a bracket-style tournament.

We already know the 20 drivers who are going to be in the All-Star race. But in what order will they run and how will that be decided?

8:36 p.m. — We’re almost off. Bryon vs. Almirola will get things started in the first knockout race.

8:30 p.m. — The knockout stage races are about to begin. Keep an eye on the lane choice for each driver, as that could play a big role in this one. The pit crews will also be involved in the race, as they have to complete a four-tire stop to begin the one-lap race. The team in the outside lane will use a NASCAR-made pit stall station strategically in the middle of pit road; that could prove to be a disadvantage for the outside lane.

8:21 p.m. — Ryan Blaney knocked Joey Logano out of the top eight, but Chase Elliott was unable to knock Aric Almirola out. The eight-car field for the finals is now settled. It is as follows:

8:19 p.m. — We have a new qualifying leader: William Byron blazes a 28.528 to take the No. 1 spot in the field. That will give him lane choice in the head-to-head races, unless one of the final drivers is able to pass him.

8:18 p.m. — Four drivers have locked into the final round so far: Kurt Busch, Kyle Larson, Ross Chastain and Martin Truex Jr. There are still a few cars left to run.

8:17 p.m. — Joey Logano knocks out Kevin Harvick. Before that, Alex Bowman logged the slowest time on the field at 29.011. He was the slowest car in practice, so it wasn’t a major surprise to see him struggle.

8:16 p.m. — Kyle Larson just ran the second-fastest time so far at 28.632. He knocked Denny Hamlin, who was the fastest car in practice, out of the top eight.

8:15 p.m. — Christopher Bell had some issues in practice, and he finishes sixth of the 11 drivers to run thus far. Bubba Wallace has been bumped out of the top eight, so he will not make the bracket.

8:11 p.m. — And now, Brad Keselowski has been eliminated from the final bracket. We’re halfway through qualifying, so 10 of 20 cars have run. Right now, Kurt Busch’s 28.620 stands alone in first place.

8:10 p.m. — Aric Almirola qualified in 28.767. That’s good for second now, but more importantly, Michael McDowell will not make the final bracket. Only eight of 20 cars advance to the qualifying bracket.

8:08 p.m. — Kurt Busch blazed a 28.620 to move into first place in the qualifying. That was nearly 0.2 seconds faster than the second-place finisher Allmendinger.

8:07 p.m. — The first five divers have run qualifying. AJ Allmendinger is in first ahead of Denny Hamlin, Bubba Wallace, Brad Keselowski and Michael McDowell in order.

8:04 p.m. — Now we’re into All-Star qualifying. AJ Allmendinger is up first and he’ll be followed by Brad Keselowski.

7:40 p.m. — Denny Hamlin had the fastest car among the 20 drivers during practice while Alex Bowman’s car was the slowest. We’ll soon see if that matters or if the slower drivers are just getting warmed up for qualifying.

7:36 p.m. — Currently, the cars are practicing firing off pit road. The cars are sliding a bit as they start, so that will be something to watch during the race. It’s hard for NASCAR cars to get to full speed from a stop without a bit of sliding.

7:34 p.m. — A reminder that this year’s qualifying is a bit different than usual. There will be a one-lap qualifying race and the top eight finishers from that will do head-to-head battle in a tournament-style bracket. They will race from pit road to the finish line after completing a full pit stop.

Eight teams will take on the All-Star Qualifying Bracket Elimination round.

7:20 p.m. — We’re currently in the practice portion of the evening. Drivers are getting a chance to test their cars on the speedway as they prepare for the multi-stage event. The race is expected to begin at roughly 8 p.m. ET.

LET’S DO THIS. Tyler Reddick leads Open practice. Time for the teams locked in for the 2022 All-Star Race to get some track time at @TXMotorSpeedway.

How does NASCAR All-Star qualifying work?

NASCAR is taking a different approach to its All-Star race qualifying in 2022. There are 20 cars in the All-Star race field, and they will begin qualifying by participating in a one-lap race. The cars will line up on the Texas Motor Speedway track in the inverse order of the owner standings and will look to produce the fastest lap in qualifying.

The eight cars that produce the fastest lap in that one-lap race will advance in qualifying to bracketed tournament that will decide the top speed.

The bracket will consist of two-car matchups that put the drivers side-by-side in the pit stalls at the end of pit road. Pit crews will run through a four-tire stop, and the drivers will speed off pit road. The drivers will then race to the finish line and the first one to reach it will advance in the bracket. The winner of that tournament will get the pole position and will have completed the race three times in total.

The first driver to reach the finish line advances to the next round. The winner of that bracket will ultimately have completed that race three times and the winner will have the pole position.

Below is a full recap of what to expect during tonight’s qualifying.

How to watch NASCAR All-Star qualifying

FS1 will air NASCAR’s All-Star qualifying in 2022. The qualifying races will begin at 8 p.m. ET but coverage of the event will begin at 7 p.m. ET on the network. Cord cutters will be able to catch the event on fuboTV, which comes with a free trial.

It should be noted that all of the drivers in this year’s NASCAR All-Star Race have already qualified for the event. Their lineup spots are locked, but they will all need to qualify to determine where within the race they will start.

A total of 20 drivers will be participating in this year’s race. Below is a list of all of them in the order that they will run in the single-lap qualifying race.