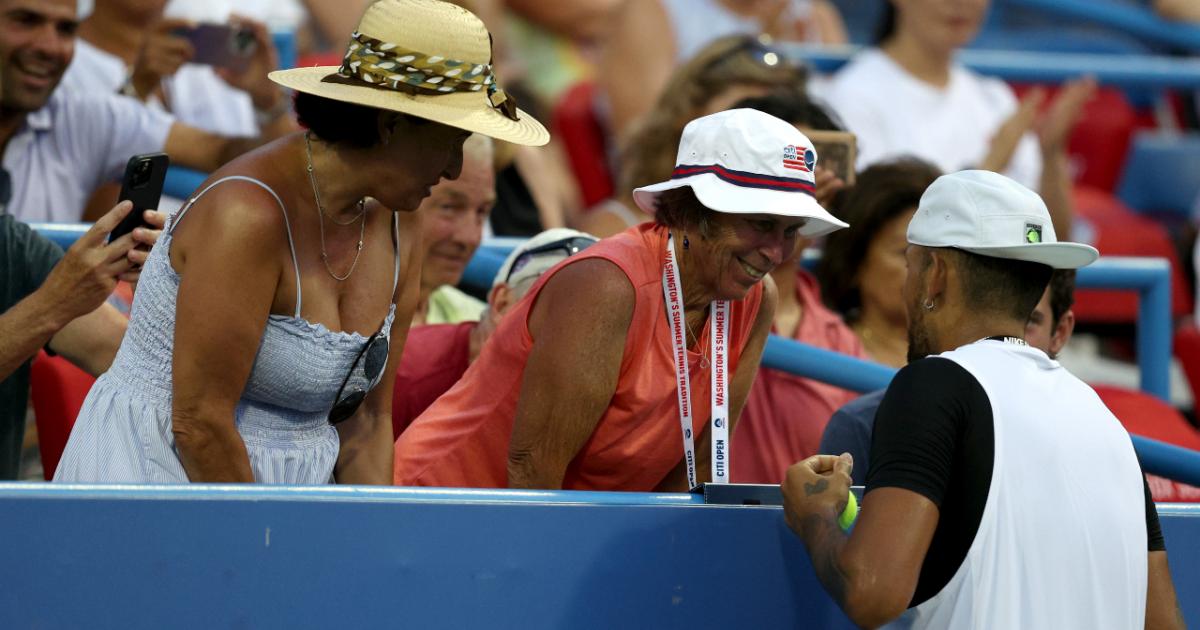 Nick Kyrgios has progressed to the Citi Open Round of 16 with another strong showing on Thursday that also highlighted his softer side off the court.

After winning a doubles title at the Atlanta Open earlier this week, the Australian looks to have taken that form into the singles arena.

Against 14th-seed Tommy Paul, Kyrgios proved far too strong, claiming a break in the opening game before winning the match in straight sets 6-3 6-4.

The Aussie wasn’t broken once as he fired home 15 aces and held off four break points.

While at his ruthless best on court, the 27-year-old did show his kinder side at one point during the match when a ball he hit long bounced awkwardly into the crowd and hit a lady in the face.

After Paul made sure the spectator was ok, Kyrgios looked to make amends himself by going over and giving her his towel as a gesture of goodwill.

Always keeping the fans in mind 😊@NickKyrgios checks on a fan after an errant bounce and provides a memorable gift ⬇️#CitiOpen pic.twitter.com/v2Dn4CbeB0

Kyrgios also chatted with fans in his last match and jokingly asked them where he should serve the ball.

The Aussie has hit the ground running in Washington and won his opening doubles match with Jack Sock at the Citi Open earlier this week against French Open champions Marcelo Arevalo and Jean-Julien Rojer.

Kyrgios then turned out the following day to beat Marcos Giron 6-3 6-2 in his first singles match.

After losing the Wimbledon final last month, the 27-year-old seems fresh and is thankful for the support around him.

“I’m just so happy to be here with my team, the love and support from the crowd,” Kyrgios said after his win against Giron.

“I’m just really happy to be out here playing some good tennis again.

“Having guys like Jack and Thanasi, these guys are much more than friends for me. They know I’d do anything for them. I’ve been there for them and they’ve been there for me. I can’t give credit to those guys enough.

“My girlfriend, my physio, my best friend…I can’t give those guys enough credit because I really wouldn’t be here without them.”

Kyrgios will next face Reilly Opelka in the Citi Open Round of 16 on Friday with his doubles quarter-final against Edouard Roger-Vasselin and Nicolas Mahut scheduled on the same day.