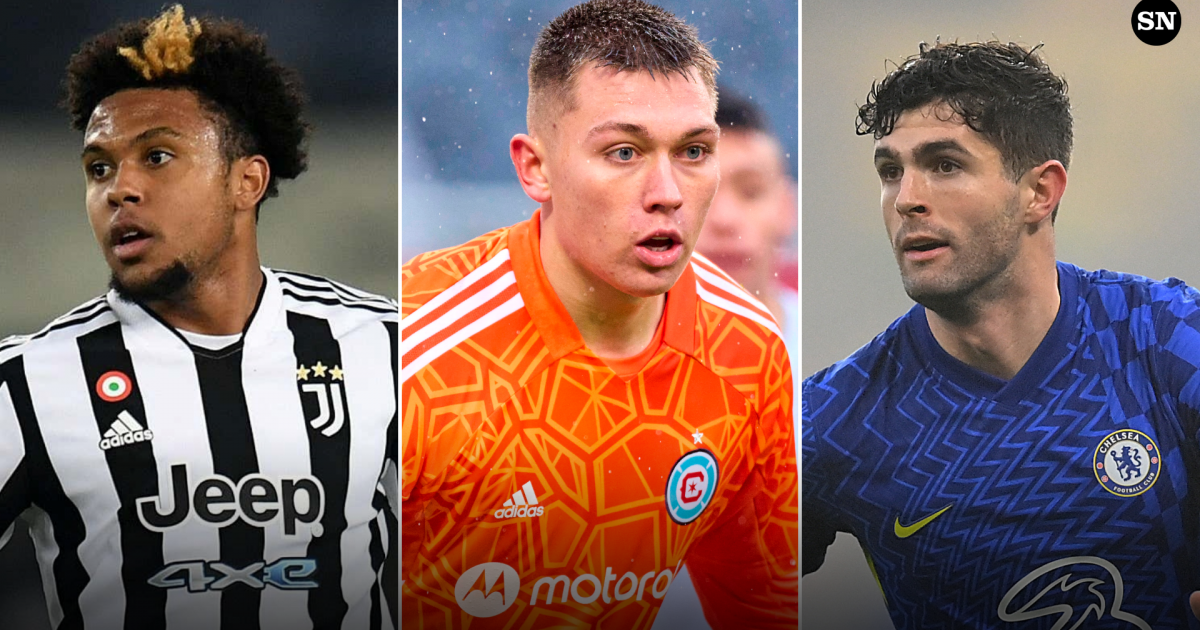 With the summer transfer window in full swing, several U.S. international players are the subject of reports and speculation ahead of what could be a career-defining season that will include the 2022 FIFA World Cup in Qatar.

That same World Cup will lead to an earlier start to the 2022-23 club season in August and a greater urgency for those with uncertain club futures to sort out their situations soon.

The USMNT players in the news include the likes of Christian Pulisic, Weston McKennie, and Sergino Dest. Other young players like Gabriel Slonina are being chased by top clubs even before they’re ready to be on the field for the senior national team.

With the transfer window only officially opening in June, a few deals involving Americans have already been completed, with Matt Turner and Brenden Aaronson completing moves to new English Premier League clubs.

Below is a list of the American players who have either officially completed deals to new clubs during this transfer window, or who have re-signed new contracts with their current clubs.

MORE: Projecting the USMNT roster and starting lineup for the 2022 World Cup

There is massive speculation, with two years left on his current Chelsea deal and a decrease in minutes last season under Thomas Tuchel, that Christian Pulisic could depart Stamford Bridge this summer.

The USMNT star has spent three seasons with the Blues, winning the Champions League title and the FIFA Club World Cup. Yet last season, Thomas Tuchel’s tactical preferences pushed Pulisic to the periphery, seeing him log just 2,207 minutes across all competitions, a low for Pulisic at Chelsea. He was often deployed out of position, playing central striker or wingback to fit Tuchel’s tactical setup.

UPDATE (July 6): There are reports stating that Raheem Sterling will soon joined Chelsea from Man City, which would push Pulisic further down the pecking order at Stamford Bridge. It was also reported the previous month that Ousmane Dembele could be on his way to Chelsea, although that seems to have fizzled out.

UPDATE (June 22): According to CBS Sports reporter Ben Jacobs, Liverpool are considering the arrival of more attacking options, but Pulisic is no longer an option. “I am told it won’t be Pulisic,” Jacobs stated on social media.

UPDATE (June 6): According to Bild reporter Christian Falk, Liverpool are indeed monitoring Pulisic as a possible replacement for Sadio Mane. Pulisic is a former Borussia Dortmund player, and while he didn’t play under Jurgen Klopp in Germany, the two would certainly have a connection. Italian publication Corriere dello Sport, in its print edition and captured here, stated that Liverpool have been told the Reds would be successful with a bid of €60 million ($64m / £51.5m).

Zack Steffen to secure loan away from Man City

The USMNT goalkeeping situation is one in significant flux, with assumed frontrunners Zack Steffen and Matt Turner both now at big Premier League clubs but neither expected to start.

In pursuit of minutes this coming season ahead of the 2022 World Cup, Steffen is reportedly on his way out of Manchester City on loan, according to the well-connected Roger Gonzalez of CBS Sports. It’s unclear at this point where he’ll go, but Steffen has made it clear he wants to play. Gonzalez referred to a loan for Steffen this summer as “likely.”

The move is a positive for USMNT fans who saw Steffen look shaky at times with time on the field at Man City hard to come by. Starved for minutes, the American made a big mistake in the FA Cup semifinals against Liverpool that gifted the Reds a spot in the final, where they would ultimately hoist the trophy.

UPDATE (June 28): According to the Manchester Evening News, backed up by Tom Bogert of MLS, Steffen is finalizing a loan to Championship club Middlesbrough, who this summer loaned out last year’s starter Joe Lumley to Reading. Steffen would be dropping down a level in England to earn more playing time, after spending multiple seasons as the backup to Ederson at Man City.

Weston McKennie to the Premier League?

After his 2021-22 season at Juventus was cut short by an ankle injury, Weston McKennie could potentially be shopped by the Italian club looking to push forward with a rebuild after missing out on every trophy this past campaign.

McKennie has grown into an everyday starter for the Serie A title contenders, and the 23-year-old still has three years left on his Juventus contract, so it would be difficult for a team to pry him loose. However, with Paul Pogba possibly on his way back to Juventus, McKennie could lose his place in the starting lineup, left to battle with Manuel Locatelli for a place alongside Pogba.

UPDATE (May 29): According to Italian publication Corriere dello Sport, if Pogba were to arrive in Turin, McKennie could be shipped out. Tottenham, led by sporting director Fabio Paratici who brought McKennie to Juventus, is apparently monitoring the situation, with Antonio Conte identifying McKennie as a player suited for the Premier League.

Just 17 years old, Chicago Fire goalkeeper Gabriel Slonina is a wanted man all around Europe, according to a number of reports over recent weeks. Slonina was even chased on the international level, as the USMNT held off an attempt by Poland to woo the young goalkeeper. Slonina doesn’t have an official appearance for the U.S. senior national team, but is expected to be heavily in the mix in the future.

It emerged that Spanish giants and defending Champions League title winners Real Madrid were among the suitors on the club level. But according to MLSsoccer.com reporter Tom Bogert, the Chicago Fire rejected an initial bid by Real Madrid for Slonina though according to his agent it’s “Gabriel’s dream” to join the club. However Chelsea also appears to be in play for the young goalkeeper.

Whoever he joins, he’s expected to be loaned back to the Chicago Fire for the foreseeable future.

UPDATE (June 12): With the Real Madrid talks hitting a snag, Chelsea look to be inserting themselves into the bidding war, per Fabrizio Romano. It seems that while Madrid was the frontrunner for a while, the Blues are currently leading the race and could complete a deal soon for €10 million.

Gabriel Slonina deal update. Chelsea are now really close to signing the talented goalkeeper, they are pushing after Real Madrid bid rejected – talks are in progress with Chelsea to get the deal done soon. 🚨🔵 #CFC

MORE: Who is “Gaga” Slonina? Teenage goalkeeper turns down Poland for USMNT

The 22-year-old defender has been with Bayern Munich since moving from FC Dallas in the summer of 2019, but he has yet to break into the first team, instead spending time on loan at Hoffenheim this past season, where injuries took a toll.

Now, returning to Bayern after the season, it’s possible that Richards could find a permanent move away. According to French publication BUT, Richards is wanted by Ligue 1 side Lyon, and Bayern would accept a move for approximately €15 million ($16.2m).

Richards’ contract expires in 2025, and would be a natural target for a club in desperate need of defensive reinforcements. Jerome Boateng is now 36 years old, Jason Denayer is leaving on a free transfer this summer, and last year’s most-used center-back Castello Lukeba is just 19 years old.

Sergino Dest to be shopped by Barcelona?

With Barcelona in a difficult financial position, the La Liga side may need to sell players to fund any desired incoming transfers this summer. American fullback Sergino Dest, who battled through injuries to make 21 appearances in league play in 2021-22, could be one of the players to make way for other arrivals.

Still just 21 years old and with three years left on his Barcelona contract, the club could make a pretty penny on Dest’s departure and still have cover for the right back position next year, should veteran Dani Alves return. While Dest has improved his defensive acumen during his time at Barcelona, his strength still lies in the attacking third and he could fit a wingback role well at a team with such a tactical setup.

UPDATE (May 21): According to Spanish publication Marca, Dest is apparently in the shop window for a price of €25 million ($26.5m / £21m). While no links to other clubs have yet materialized, previous links to the likes of Chelsea, Bayern Munich, and Roma could reemerge.

Injuries troubled Bayern Munich defender Chris Richards for much of his loan spell at Hoffenheim, and he returns to his parent club looking for a fresh start. He put in good shifts at the Bundesliga side on loan, but it remains to be seen whether he has elevated his standing enough at Bayern to sniff the first team.

Despite the departure of Niklas Sule to Borussia Dortmund, it will be difficult for the 22-year-old Alabama product to find a way into the Bayern Munich everyday rotation. With three years left on his Bayern Munich contract, that could prompt a new landing spot this summer.

UPDATE (May 30): According to the Daily Telegraph, Richards is being monitored by Premier League side Crystal Palace. While there’s no mention of a permanent fee or loan deal, expect to see more noise as June turns to July.

While John Brooks has thus far been frozen out of the U.S. national team setup under Gregg Berhalter, his club future is also in question.

The former Wolfsburg defender is out of contract this summer and stated he will not return to the German club. Brooks played poorly in the first half of the 2021-22 season as Wolfsburg battled relegation and suffered group stage elimination in the UEFA Champions League. But he turned things around in the second half to help the club successfully stave off the drop.

UPDATE (June 8): According to German publication Kicker (as passed on by Bundesliga commentator Derek Rae), Brooks has been in contact with Hoffenheim about possibly signing with the club. Hoffenheim finished ninth in the last Bundesliga season but had massive defensive issues, conceding 60 goals, third-most in the German top flight.