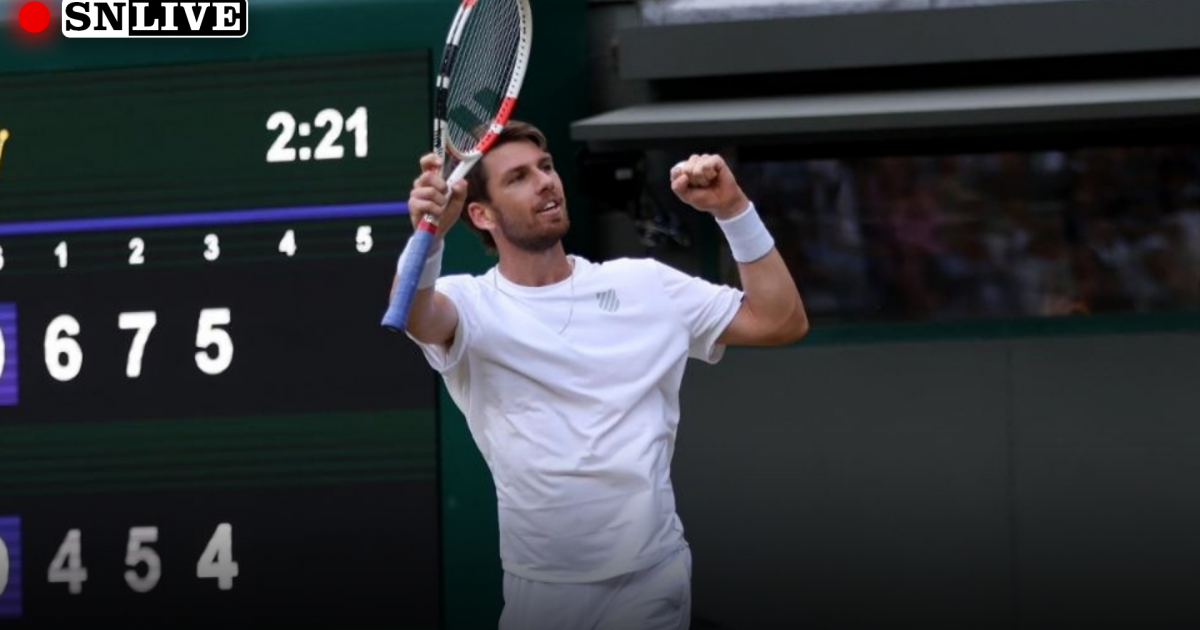 Cameron Norrie seeks to continue his best ever run at a Grand Slam on Tuesday as he takes on David Goffin in the Wimbledon quarterfinals.

Norrie has never reached this stage of a major tournament before but, after an impressive straight-sets victory over Tommy Paul, he is the favourite to win Tuesday’s match and set up a semifinal against either Jannik Sinner or defending champions Novak Djokovic.

Standing in his way is Goffin, a four-time major quarterfinalist and a six-time title winner on the ATP Tour, but a player with a lower win rate on grass (24 of 45 career matches) than any other surface.

The Sporting News brings you live updates and highlights from the match at SW19.

This time it’s Goffin who misses when changing direction in the rally, but Norrie pulls a forehand long. A one-two punch on serve and another ferocious forehand bring up two set points for Goffin, and Norrie misses to the left again. It’s Goffin who goes 1-0 up.

A super passing shot from Goffin takes him to within two points of the set, but suddenly Norrie finds his footing. He finishes off a point well at the net and rips a forehand winner for 40-30, before the ball flies off the Goffin frame on the baseline. Norrie, and the crowd, are waking up a bit.

It’s a comfortable hold to love for Goffin, who seals the game with an ace that sends up a puff of white. You wouldn’t think it was he who’d played the most tennis at these championships.

It’s Goffin who looks the more comfortable at the moment. Norrie challenges a (rather poor) line call but another backhand from the Belgian forces an error from the home favourite. But the radar on that forehand is certainly off, as three consecutive misses from that wing lets Goffin get to deuce. Another catches the middle of the net chord and we have our first break point of the contest, and just as Norrie thinks he’s hit a winner on the run, it turns out it dropped wide. Advantage Goffin in this set.

We’ve already seen a few second serves returned straight into the net — Norrie’s forehand in particular looks a little tight. Another well-timed backhand, and another second-serve return in the net, gives Goffin a hold to love.

A lot has been made of Norrie’s fitness levels these days but Goffin is moving very well for a man who played five hours of tennis on Sunday. He misses from a Norrie drop shot but a fine return has the Brit on the backfoot, albeit briefly, as it proves another comfortable hold.

Three loose shots from Norrie let Goffin recover for 40-15. The Belgian then sends a forehand into the tramlines and Norrie delivers a brutal forehand for deuce at the end of a long rally. Goffin’s first serve seems to be deserting him but a Norrie miss and a couple of well-angled shots means we stay on serve.

These early baseline exchanges are going Norrie’s way. He forces two errors from Goffin before changing things up with a drop shot for 40-0. A super cross-court backhand levels up the scores.

Goffin sends a backhand long for 15-15, but two big first serves set up game point. A decent early rally ends with Goffin slapping a forehand into the net, but a fine backhand sees him through the opening game.

3.52 p.m.: The warm-ups are just being concluded. We’re ready for play here. It’s Goffin vs. Norrie for the semifinals!

3.38 p.m.: BBC footage has just shown Norrie leaving the practice courts, so we’re not far from this one getting underway.

3.27 p.m.: Tatjana Maria has just won a gruelling three-set quarterfinal against compatriot Jule Niemeier, so Goffin vs. Norrie will be up next on Court 1.

3.15 p.m.: Jannik Sinner now leads Djokovic by two sets to love on Centre Court! We could be in for a major shock today.

One set away from the semi-finals. There’s no stopping @janniksin on Centre Court#Wimbledon | #CentreCourt100 pic.twitter.com/LWBGl5iK4o

3.05 p.m.: Norrie is bidding to become only the second British player — after Andy Murray, of course — to win the men’s singles title at Wimbledon since the 1930s. There’s still a fair way to go to achieve that dream, though.

Goffin is hoping to reach his first major semifinal, at the age of 31.

2.50 p.m.: Norrie produced a superb display to defeat 30th seed Tommy Paul in the previous round. His opponent today, meanwhile, came through a marathon five-set encounter with Frances Tiafoe.

The winner will face either defending champion Novak Djokovic or 10th seed Jannik Sinner in the last four. Sinner is at least part way to springing a shock in their quarterfinal, having recovered from 4-1 down to take the opening set 7-5.

Opening set: @janniksin – from 4-1 down, too 🇮🇹 👏#Wimbledon | #CentreCourt100 pic.twitter.com/vCJMJk6Hv8

2.30 p.m.: Goffin vs. Norrie is second on Court No.1 today. The match will take place after the women’s quarterfinal between Tatjana Maria and Jule Niemeier, which is in the latter stages of the second set.

2:20 p.m: It’s men’s quarterfinal day at Wimbledon 2022 and the home crowd have a new hero to cheer. Cameron Norrie takes to Court 1 for the first time at this stage of a Grand Slam and will face the former world No.7 David Goffin, who emerged victorious from a five-set marathon against Frances Tiafoe in the last round.