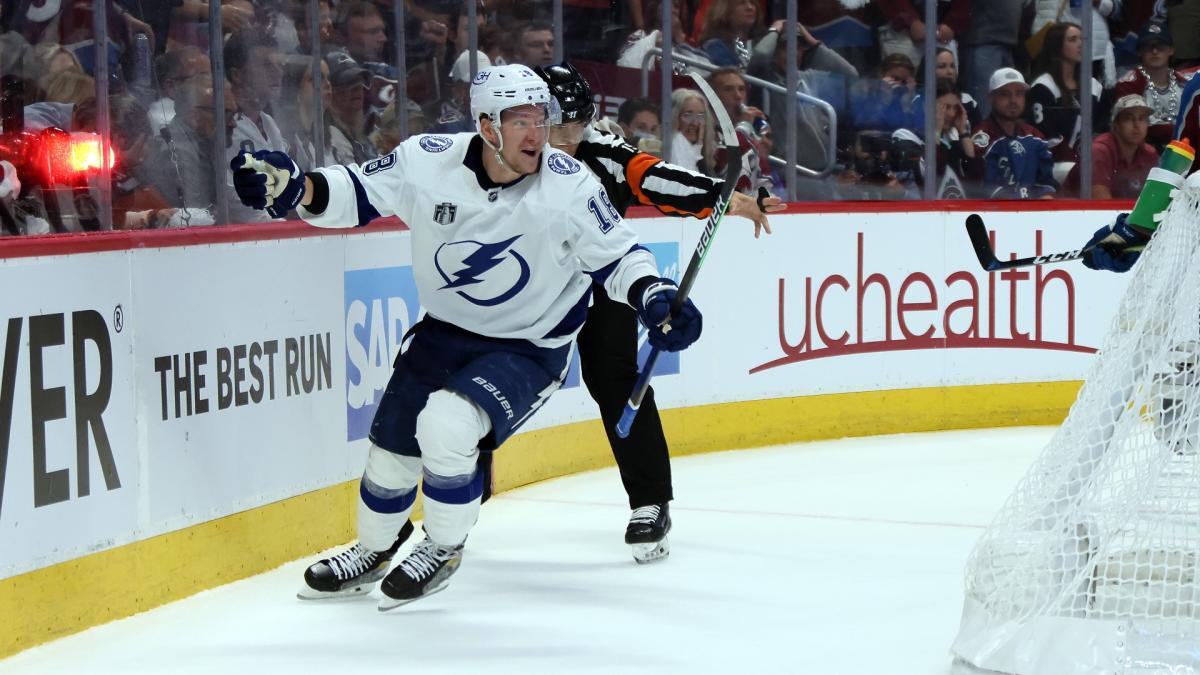 It seems all the Tampa Bay Lightning need is a pulse.

With the Stanley Cup in the building and the preparations for a championship celebration arranged, the Lightning spoiled the party on Friday night at Ball Arena, scoring late to defeat the Colorado Avalanche 3-2 in Game 5.

It was Ondrej Palat who prolonged the Stanley Cup Final, scoring on an expert dissection of the offensive zone from the Lightning’s top five-man unit with a little over six minutes remaining in regulation.

Scored on a one-time shot in the high slot on a pass from Victor Hedman, Palat’s goal established a third and final lead of the game for the team looking for a third consecutive Stanley Cup.

Andrei Vasilevskiy was brilliant once again in an elimination scenario, turning aside 35 of the 37 shots faced in the Lightning net. Jan Rutta and Nikita Kucherov had the other goals for Tampa Bay, while Valeri Nichushkin and Cale Makar scored temporary equalizers for Colorado. Makar added to his team-high point total with two points, continuing to lead the Avalanche offensively through these playoffs.

In a twist of fate, a too-many men penalty — a legitimate one — was assessed against the Avalanche in the final minutes, thwarting a realistic chance of the Avalanche scoring a third equalizer in the game.

That late infraction on the Avalanche was one example of the many ways in which it felt like the Lightning were using their surroundings, and the situation, to their advantage in their bid to stay alive.

It seemed as though there was an expectation in the building, and perhaps among the Avalanche, that they were to end the series in Game 5 — and justifiable so. And when it didn’t happen for them, and for the crowd, immediately, the nervous energy and frustration built and built, with much of it directed toward the officials.

Meanwhile, the Lightning were unfazed, remaining diligent in their defensive structure, poking and prodding, and allowing the Avalanche to react to changes in emotion and game state as they looked to stay within striking distance.

Colorado would break through twice, tying the game momentarily with both its goals. But it was almost as though the moments worked against the Avalanche, because the expectation returned, seeing them press too much, leaving openings for the Lightning to answer back.

It was the perfect example of the situational know-how benefitting the team that has navigated these waters before.

Now the Lightning will return home for an elimination Game 6 to continue to test the nerve of a Colorado team that still hasn’t proved that they can complete the job.

If there’s one area of Colorado’s game that is particularly concerning, it remains the situation in goal, and the massive advantage Vasilevskiy appears to have on Darcy Kuemper.

Rutta’s first of the playoffs, which opened the scoring, marked the second time in as many games that Kuemper allowed a goal that he clearly should have stopped. It was a non-chance from a non-scorer, and a shot released from the top of the circle without traffic in front of him.

Goaltending experts will also pick apart Palat’s goal when considering Kuemper’s role. While it’s a glorious look for the unheralded forward, Kuemper does not cleanly challenge the shooter, and the misplacement of his stick allows the shot to travel through his padding into the back of the net.

With Vasilevskiy seldom beat clean since the Game 2 blowout, the Avalanche are at risk of having the goaltending divide spoil what seemed like a Stanley Cup shoe-in.

Still, the Lightning are noticeably labouring nearing the finish on a third consecutive postseason run that will involve a minimum 23 games.

Anthony Cirelli and Erik Cernak each managed to play through their respective injuries, while Brayden Point wasn’t deemed ready. Still, Cirelli was limited to less than 12 minutes, meaning the Lightning could potentially be without either of their dominant two-way centres as the series continues.

It feels like survival, just as much as it does hockey, for the Lightning.