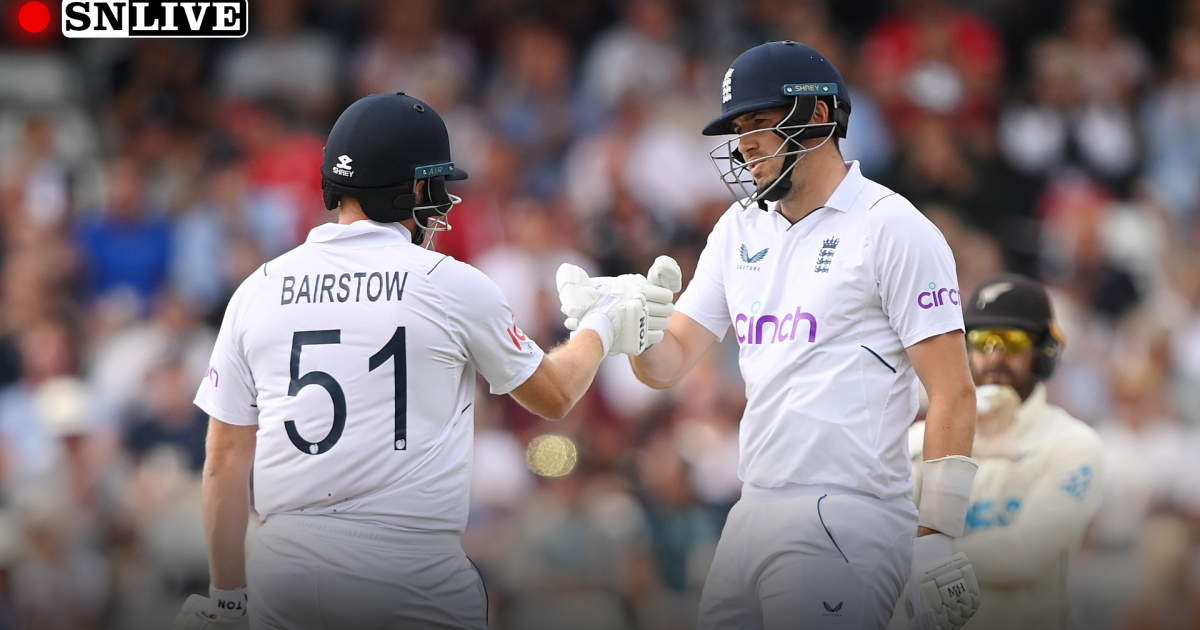 HEADINGLEY, LEEDS — Jonny Bairstow was the toast of Headingley after he led a thrilling England counter-attack on day two of the third Test against New Zealand.

Yorkshireman Bairstow backed up his stunning match-winning hundred at Trent Bridge with another majestic effort on his home ground, reaching 130 not out at stumps as he combined with debutant Jamie Overton in England’s biggest ever seventh-wicket stand.

Their unbeaten partnership of 209 accounted for the bulk of England’s 264/6 after Trent Boult laid waste to the hosts’ top orde. Fast bowling all-rounder Overton will resume 11 shy of his second first-class ton.

On another true batting surface, Daryl Mitchell reached three figures for the third time in the series as New Zealand were dismissed for 329  — left-arm spinner Jack Leach taking 5/100 for a first five-wicket haul in England.

Captain Ben Stokes inexplicably holed out to Neil Wagner and Ben Foakes was trapped lbw in the same over. At that stage, New Zealand looked to be firmly on course for a consolation victory in the three-match rubber, but Bairstow and Overton had other ideas.

The Sporting News is live from Headingley, delivering video and written analysis throughout Day 3 below.

Friday evening was all about local hero Jonny Bairstow racing to an unbeaten 130 not out but all eyes will be on his partner Jamie Overton when the action resumes. The pair have already put on an England Test record of 209 for the seventh wicket and Overton is 11 runs away from a century on debut.

“Clubbed away into western terrace!”

If he reaches the landmark, it will be the 28-year-old’s second first-class hundred. His first came when he clattered 120 off 92 balls with 15 fours and six sixes from number 10 during Somerset’s County Championship match with Warwickshire in August 2020. There were a couple of lusty blows for six from the fast bowling all-rounder yesterday, but his 89 from 106 deliveries was comparatively circumspect.

Underwhelming then totally overwhelming from Overton

When Overton bowled too short after being given the opening stint from the Kirkstall Lane End on Friday morning, before seeing Mitchell and Southee climb into his next spell, Headingley was witnessing a debut going awry.

It certainly was not in the script that the hulking Surrey all-rounder would start smoking fours and sixes against a world-class attack after tea. As introductions to Test cricket go, Overton’s is certainly among the most gloriously disorientating in recent memory.

Of course, getting going at the highest level is seldom straightforward. Just ask the all-rounder batting at No.8 on the other side. New Zealand’s back-up bowling to Boult, Southee and Wagner certainly looked a little thin with Michael Bracewell as their frontline spinner. When captain Kane Williamson desperately needed someone to put the breaks on the burgeoning Bairstow and Overton stand, Bracewell sent down four overs for 37 runs. Those are T20 figures. It was that kind of evening.

After Stokes’ flight of fancy in the afternoon, England’s recovery was all on Bairstow. Handily for head coach Brendon McCullum, this is a player in the form of his life. Bairstow is a man with stunning strokeplaying gifts and relentless attacking intent. But, after his Trent Bridge heroics, it was his good judgement in a crisis that enabled him to take the final session away from an embattled New Zealand attack.

He reached a run-a-ball 50 that felt pretty chanceless and deliberately pressed down on the accelerator thereafter, finding a willing ally in Overton as he racked up another sensational ton. As frustration abounds around Pope and Crawley’s latest cheap dismissals, it is worth remembering Bairstow has reached this point of full realisation in his 86th Test.

A knock to delight the Yorkshire masses came on the back of his magical 136 at Trent Bridge, 140 in the first Test against West Indies earlier this year and 113 in the drawn Ashes encounter in Sydney. The latter innings now feels like a career turning moment that has opened up a wide road of possibilities.

England’s wasteful half-hour of predominantly short-pitched bowling during Mitchell and Southee’s breezy 60-run stand was made to look all the more foolish when Boult produced a spell of fast, full destruction. Not that it was just a matter of pitching it up and seeing what happened — these were exploits of the highest quality that placed the flaws of those on the receiving end under a harsher glare than the afternoon sun in West Yorkshire.

Lees, back on the ground where he learned his trade and looking to build upon his most convincing Test last time out, scored his only runs via a wild slash that was dropped at slip. He was castled by a beauty, as were Pope and Crawley.

However, aiming booming drives at an elite pace bowler swinging the ball late were not percentage calls by England’s two bright young batting hopes. Pope and Crawley’s shots were those of men who did not trust their defensive technique to weather Boult’s irresistible storm.

Mitchell had to bide his time and ride out that superb Potts spell, but he showed his sparkling form as three figures approached, first swivelling to pull a wayward Jamie Overton for four before a picturebook six off Leach as he celebrated and began to remove his helmet as soon as the ball left the bat.

Before he reached three figures, the 31-year-old had already established a new record for the most runs scored by a New Zealand batter in England. He is now also the first New Zealander to score three consecutive tons against these opponents — not a bad effort at all in a losing cause.

How to watch England vs. New Zealand: TV channel and live streaming details

UK: Sky Sports will show the series in the UK on its Sky Sports Main Event and Sky Sport Cricket channels. Subscribers can also watch online via the Sky Sports website or through the Sky Go app.

India: The Sony Sports Network has the rights to the tour, with Sony Ten 2 and Ten 2 HD showing the Test. England vs. New Zealand can also be streamed on Sony Liv.

Australia: The Fox Cricket Channel on Foxtel will show England vs. New Zealand in Australia. Fans who are not Fox customers can sign up for the Kayo Sports streaming service.

USA & Canada: Willow TV will show the action in the USA. A dedicated cricket streaming service, it is also available in Canada and can be sourced from a number of cable providers including Dish, Spectrum and Xfinity.