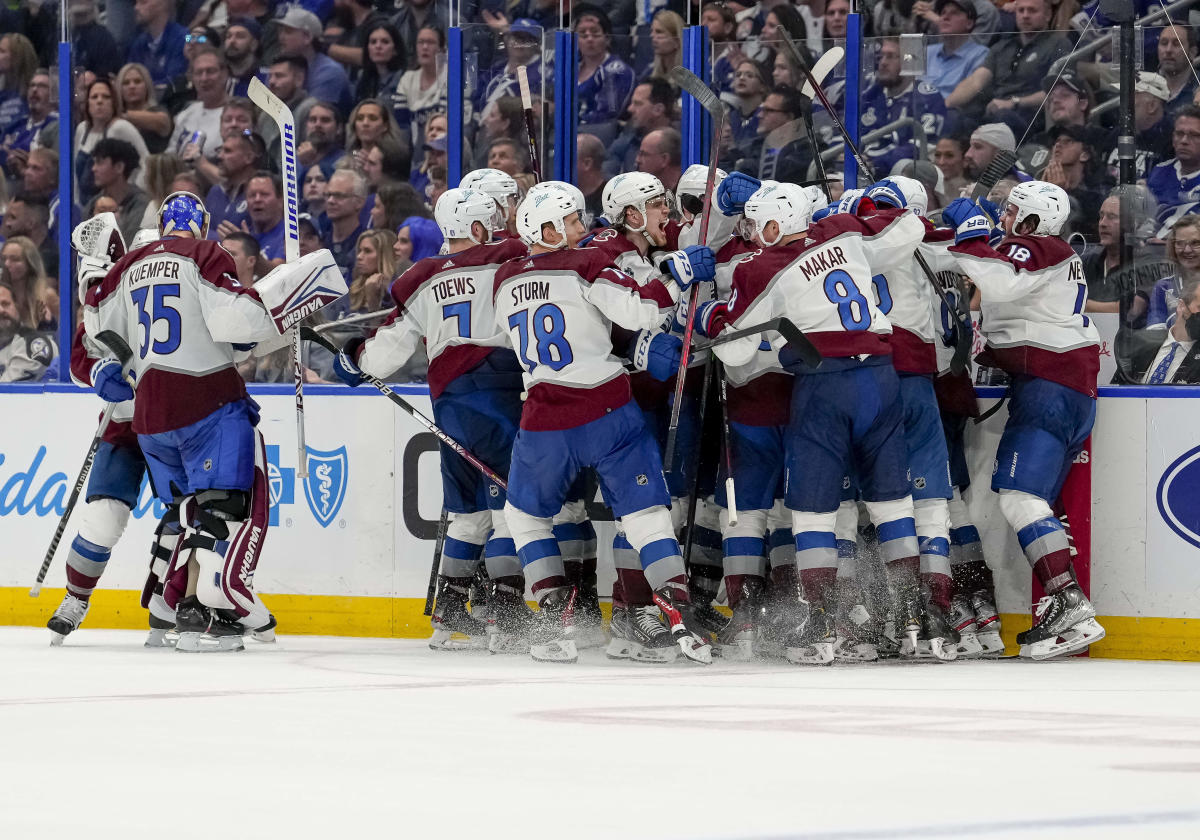 Nazem Kadri scored a weird and somewhat controversial overtime goal in Game 4 to put the NHL’s back-to-back champion Tampa Bay Lightning on the brink of elimination. The Colorado Avalanche are now one win away from coming through as preseason favorites to win the Stanley Cup. Colorado is a -185 favorite to win Game 5 on their home ice and wrap things up. Overall, the Avalanche are now -1400 favorites to win the Stanley Cup as owners of a 3-1 series lead.

Tampa Bay’s quest of becoming the first team since the 1980-83 New York Islanders to win three straight Stanley Cups is officially on life support. They would need Colorado to lose three straight games, something the Avalanche only did twice all season. The first time it happened was games 2-4 of the regular season. The only other time it happened was the final stretch of the season, when the Avalanche clinched positioning and were simply playing out the string.

The Colorado Avalanche opened as -150 favorites on the moneyline to win Game 5 and skate off their home rink with the Stanley Cup. As of Friday afternoon, the Avalanche have moved all the way to -185 favorites. Currently at BetMGM, 70% of bets and 88% of the money is backing Colorado to wrap things up on Friday. Bettors also expect the Avalanche to win comfortably, as 87% of the bets are backing Colorado to cover the puck-line and win by at least two goals.

The two games in Tampa Bay were much closer, with Colorado holding a 4.64 to 4.45 edge in expected goals at 5-on-5. However, the first two games in the series were dominated by the Avalanche. Overall in the series, the Avalanche have outscored Tampa Bay 16-11, while holding a shot advantage of 144-111 and a 5-on-5 expected goal advantage of 8.8 to 6. While two overtime games might suggest a razor thin separation between these teams, Colorado has clearly controlled play for most of the series.

The Avalanche are 15-3 in these playoffs, and this is only the second time in four series they’ve even needed a Game 5. Colorado returned home with a 3-1 series lead in their second round matchup against St. Louis, but failed to close that series out at home. Tampa Bay will hope that history repeats itself, but bettors aren’t expecting it.

Bettors also love the over

The first three games of the Stanley Cup Finals all went over the total, leading 88% of bettors to bet that Game 4 would go over the total of six goals. Unfortunately for those bettors, Game 4 finished 3-2 in overtime, cashing a ticket for under bettors. While we finally saw a game go under in the last contest, bettors are lining up to bet the over in Game 5 once again.

Currently at BetMGM, 84% of bets and 92% of the money is on Game 5 to go over six goals. This series has averaged 6.75 goals per game, and as mentioned above, the over is 3-1 through four games.

Betting the over in Avalanche games makes plenty of sense. They can get you there on some nights by themselves. They’ve scored six or more goals in six playoff games already, including Game 2 of this series. On average, they’re scoring 4.5 goals per game in these playoffs.

If there’s been a question mark about this Colorado team in these playoffs, it’d have to be their goaltending. Darcy Kuemper is stopping under 90% of the shots he’s facing over the course of the postseason and he’s allowed nearly seven goals more than expected of an average goalie. Kuemper was pulled in Game 3 and there were questions about whether he would even start Game 4. Coach Jared Bednar showed faith in his No. 1 goalie, and Kuemper rewarded him with a strong showing, stopping 37 of 39 shots his last time out.

MacKinnon is a popular prop bet

Nathan MacKinnon is Colorado’s most dynamic forward, and it’s a testament to how good and deep this team is that they have a 3-1 series lead despite MacKinnon having just one goal in this series. MacKinnon finally got off the schneid in Game 4, when a pass deflected off his skate and in. Bettors are hoping that means MacKinnon is ready to break out.

The three most popular props ahead of Game 5 all include MacKinnon. MacKinnon is +900 to score the first goal of the game and +115 to score at any time. With bettors expecting a Colorado win, it would make sense for MacKinnon to be involved. Overall, MacKinnon has 12 goals in 18 playoff games, but he’s scored in just nine games.

MacKinnon currently has the second best odds to win the Conn Smythe as playoff MVP at +550. His teammate, Cale Makar, is a massive -550 favorite to win that honor.