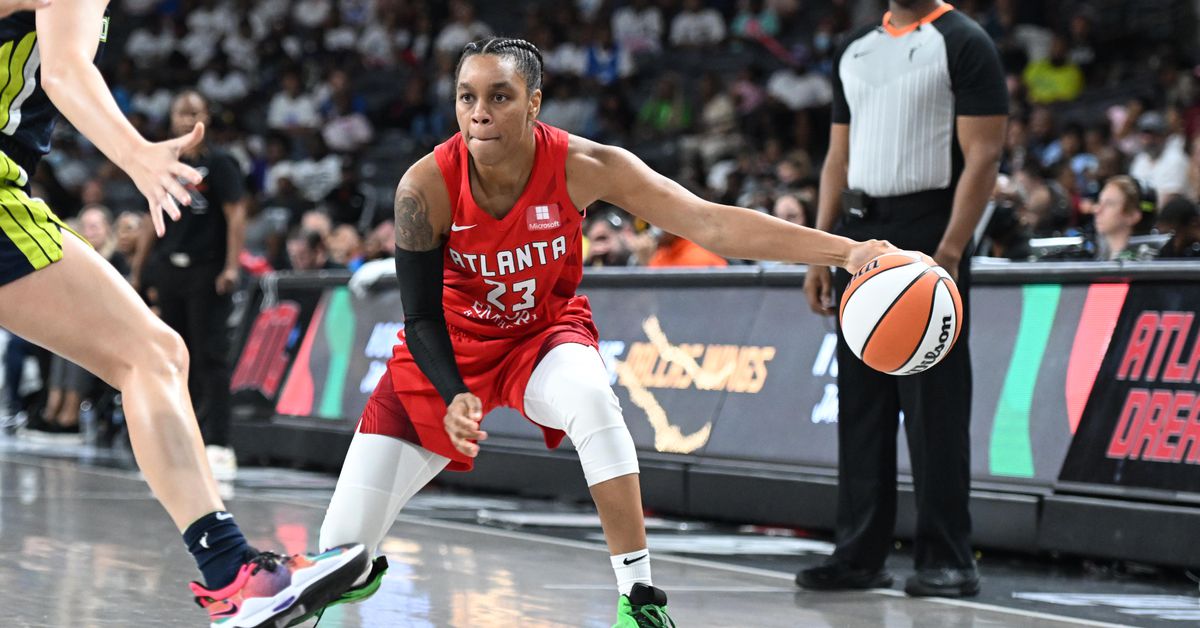 In the 26th season of the “Women’s N.B.A.,” the designation seems awkward, as does the early tendency by media to refer to the league by its full name, the Women’s National Basketball Association.

Yet, in 2022, is the league’s official name not only awkward and unnecessarily specific but also anachronistic and out-of-step with the preferred identities of all the league’s players? If not all WNBA players identify as women, should the league still be named the Women’s National Basketball Association?

Could the WNBA simply be the WNBA? Should the WNBA follow the example of one of its players in the Atlanta Dream’s AD?

The No. 2 pick by the New York Liberty in the 2019 WNBA Draft out of Louisville, AD recently joined their hometown Atlanta Dream. After struggling through injuries and long COVID during their tenure in New York, they quickly have reminded fans of the talent that made them a top prospect, exhibiting aggressive, multilevel scoring chops as they have averaged 14 points in more than 25 minutes per game in four games with the Dream.

In addition to an expanded opportunity in Atlanta, it is worth considering how their comfort and confidence in who they are also explains their improved play.

During their extended and excruciating battle with COVID-19, AD reflected on their identity, coming to understand, with the assistance of a therapist, that they are AD. “I don’t put a title on myself. I just view myself as AD,” they told Sports Illustrated before the 2022 season.

They are the first player in the league whose official name is a set of initials.

Elaborating, they shared, “I realized I was trying to hide who I was to make other people happy. As I did the work, I realized it’s O.K. to be who you want to be and who you are. It’s O.K. if some people don’t like it….it feels good to be who I truly am.”

AD eschews any labels, choosing not to identify as nonbinary or transgender.

However, they have made it clear that they do not want to be identified as a woman or through she/her pronouns. In a recent interview with a local Atlanta news station, they revealed, “I knew I never liked people calling me like, ‘Hey, girl! Lady!,’ or anything like that. ‘Baby girl!’ It just never felt right towards me.”

In the interview, they further explained,

I completely understand that when I get on the basketball court I’m playing with women. But when I’m with my guy friends, they call me ‘he/him,’ and I’m perfectly fine with that. My fiancé calls me ‘he/him.’ Sometimes she says ‘they/them.’ But when it comes to basketball, it’s either ‘AD’ or ‘they/them,’ and that’s what, you know, feels natural for me.

As such, the W in WNBA—”Women’s”—does not account for who they are. It is exclusionary.

AD is not the first, and is unlikely to be the last, player who does not identify as a woman. Before last season, current free agent Layshia Clarendon came out as transgender and nonbinary, using they/them, she/her and he/him pronouns.

AD’s and Clarendon’s truths suggest that, in order to accurately represent its players, the WNBA needs to reflect on its official name.

Last summer, in response to an announcement by the NWSL, the National Women’s Soccer League, about a rebranding effort, Portland Thorns FC goalkeeper Bella Bixby tweeted, “Drop the ‘W’ in NWSL. It is non-inclusive, and we’re over it,” before adding, “Want to celebrate women? Watch the sports we play, share our excellence. Acknowledging that we are women simply by adding to our league name does NOT in any way celebrate women.”

When establishing the league in 1997, the so-called “Women’s N.B.A.” wanted to celebrate that its players were women. Early advertisements and media messaging emphasized players’ heterosexual femininity.

In the intervening 26 years, the league has moved beyond such limited imagery, shifting, albeit gradually, to branding efforts that reflect the diversity of athletes who compose the league.

In 2022, as Pride Month comes to a close, it’s time for the league to shift further.

Considering the years of energy and effort the league has invested in establishing the WNBA in the American sports consciousness, it’s unreasonable to expect it to engage in a full rebrand.

Hence, the simple, elegant solution that AD has trail blazed. As AD demonstrates by identifying as AD, and nothing more, the W in WNBA does not have stand for “Women’s.” It could just be a W. The W.

As Frankie de la Cretaz wrote in a Sports Illustrated profile of Clarendon in April 2021, “[T]he way we currently categorize athletics is in need of an overhaul.”

In recent years, the WNBA has been at the forefront of a number of progressive efforts. Next, it can revolutionize how we think about gender, identity and sports.

“We Got Next” still works as a slogan.