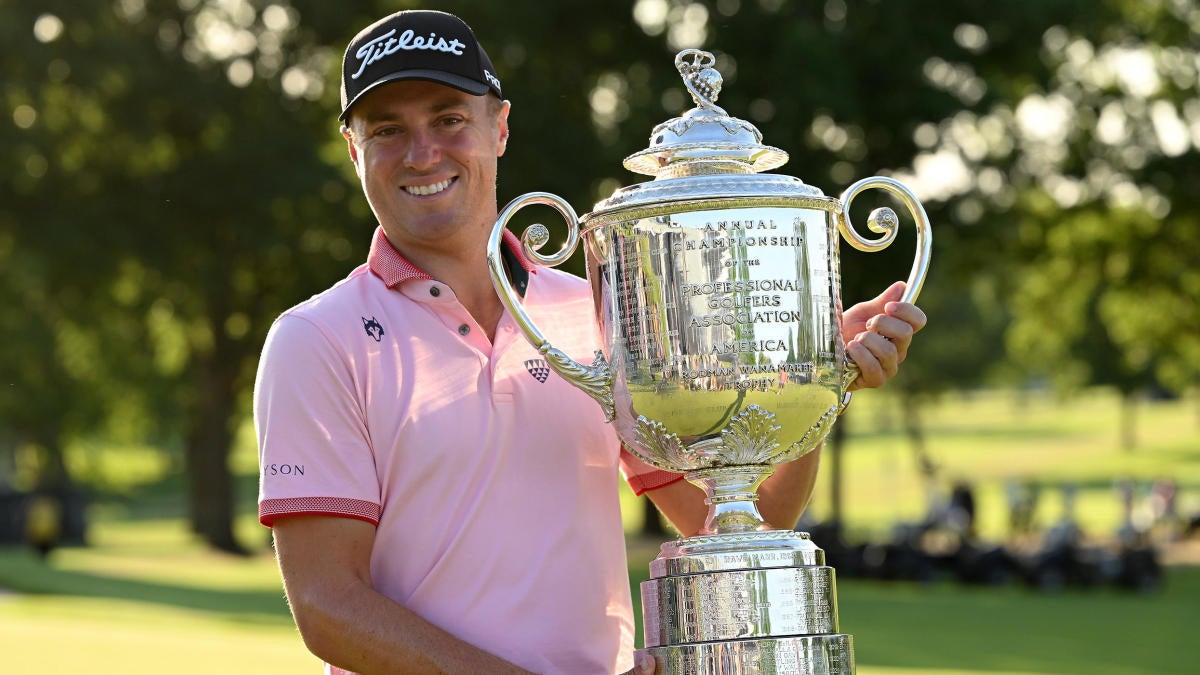 Former Alabama golfer and die-hard Crimson Tide football fan Justin Thomas came from seven strokes back to win the PGA Championship via a three-hole playoff on Sunday. He wasted no time chiming in on what has become one of the top college football stories of the year during his post-tournament interview with SiriusXM.

Asked if he follows the same “24-hour” celebration rule that Alabama coach Nick Saban utilizes following his team’s big wins, Thomas made sure to take a shot at Texas A&M’s Jimbo Fisher, who is now very publicly at odds with Saban.

“Yeah, I got a 24-hour rule,” Thomas said. “I’m not sure what Jimbo Fisher’s rule is, but I guess he’s gotta win something first before he figures out his rules.”

This, of course, is in reference to last week’s dust-up between Saban and Fisher, which began when Saban told Birmingham business leaders at a conference that Texas A&M “bought every player on their team” through the NCAA’s new name, image and likeness rules. In response, Fisher called an impromptu press conference the next morning and went off on his former boss.

“It’s despicable that we have to sit here at this level of ball and say these things to defend the people of this organization, the kids, 17-year-old kids and their families,” Fisher said. “It’s amazing. Some people think they’re God. Go dig into how ‘God’ did his deal. You may find out about a lot of things you don’t want to know. We build him up to be the czar of football. Go dig into his past or anybody that’s ever coached with him. You can find out anything you want to find out, what he does and how he does it. It’s despicable; it really is.”

Saban later apologized for singling out Texas A&M, but reiterated his desire for NIL reform that would make schools in every state abide by the same rules.

Thomas clearly isn’t impressed with Fisher’s résumé as the coach at Texas A&M. Fisher is 34-14 in four seasons leading the Aggies — the exact same record his predecessor, Kevin Sumlin, had during his first 48 games. Fisher did become the first former Saban assistant to beat his one-time boss in last year’s thrilling 41-38 win in College Station. Despite that, however, Texas A&M still finished 8-4 and 4-4 in the SEC.

Here’s a look at Fisher’s career at Texas A&M:

The pandemic-shortened 2020 season was the outlier for Fisher, at least in terms of contending for national championships. The Aggies finished the season ranked No. 5 in the final College Football Playoff rankings, one spot behind Notre Dame, which played in the ACC.

Narrowly missing out on the CFP in a wild season defined in part by the COVID-19 pandemic clearly wasn’t enough to impress Thomas.

‘She was my everything’: Lexi Thompson competes with new outlook at majors after the loss of her beloved Mimi
Tokyo Olympics expected to be 2x forecasted cost
Evaluating Russell Wilson and the Denver Broncos after minicamp
DALLAS WINGS vs. ATLANTA DREAM | FULL GAME HIGHLIGHTS | June 21, 2022
How Nathan MacKinnon molded Avs into Stanley Cup champions