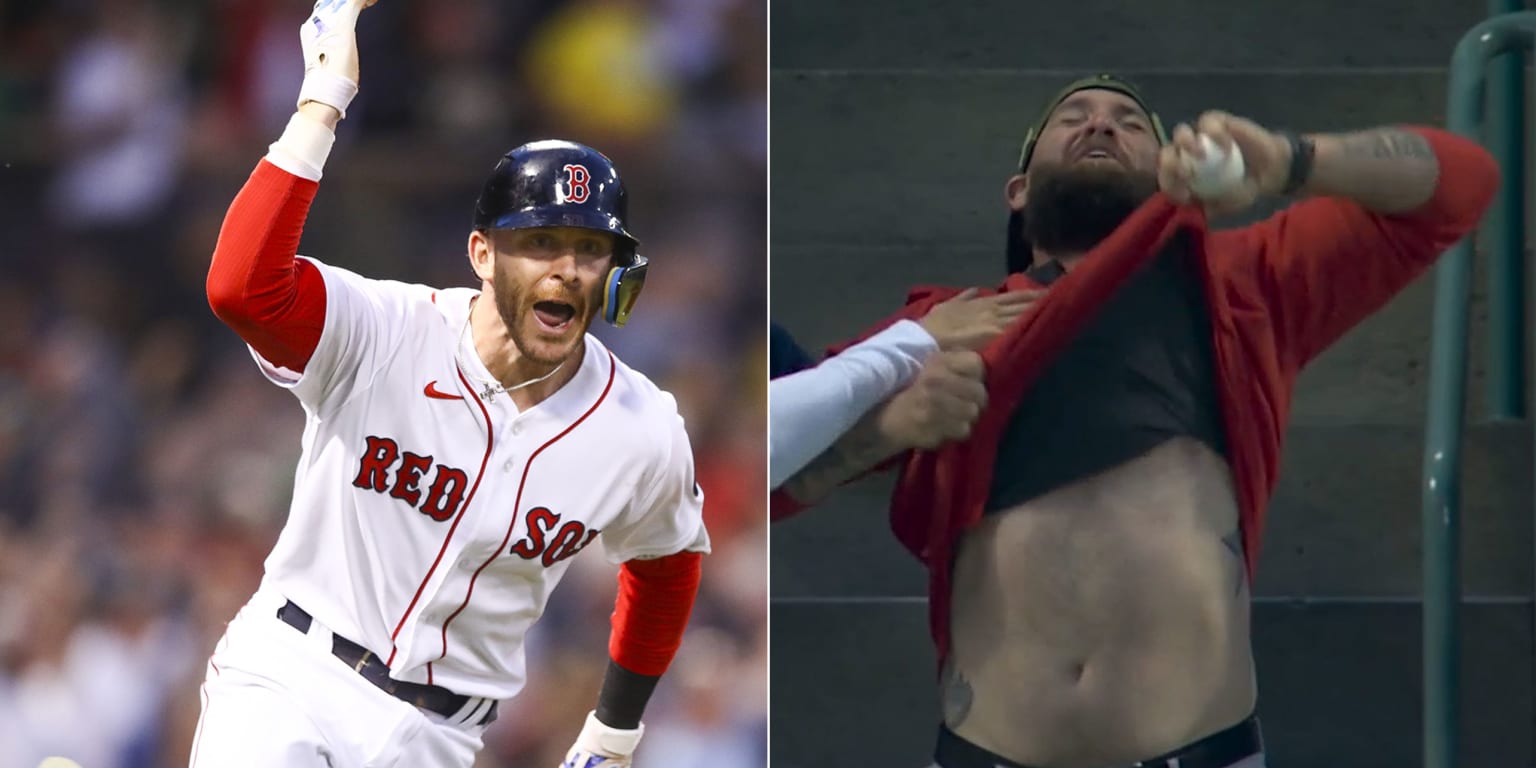 BOSTON — You know the good times at Fenway Park are rolling again when the hottest hitter on the Red Sox hits a grand slam that just happens to be caught in the Monster Seats by a 2013 World Series hero.

And it’s debatable who was more excited: Trevor Story after belting the grand slam that gave him four homers and 11 RBIs over the last two games, or Jonny Gomes, who caught the ball with his right biceps and held onto it like a newborn baby.

“So I’m officially the only guy to play both sides of the wall: Fact. An absolute fact,” beamed Gomes while watching the Red Sox pull out a 7-3 win over the Mariners on Friday night.

If you couldn’t tell by Story’s body language as he crouched down and tried to will the liner into home run territory, he was pretty fired up also.

“I knew I hit it well enough. I just didn’t know if it was going to have the height. So, yeah, I was just trying to crouch and make it higher,” said Story. “Obviously, any time hitting a grand slam is special, but coming off how it went last night, too, just kind of riding that wave.”

When did Story become aware that it was Gomes who ended up with his fourth career slam?

“Not till after the game. I saw a clip of it and I saw Gomes just going nuts, and that was cool,” said Story.

Gomes presented the ball to Story in the clubhouse after the game. But not before he broke out his sharpie.

“That’s something special,” said Story. “I’ll never forget that, and I just had him sign it for me because it was my first grand slam as a Red Sox and that’s something I thought was pretty special and a cool moment, so I had him sign the other side of it.”

Did Gomes, who used to play in front of the Green Monster instead of above it, have a strategy as Story’s Statcast-projected 106.8 mph laser zoomed toward him?

“Smother [it],” said Gomes. “Can’t let it ricochet away. Actually, I was on alert. I thought [Rafael] Devers was going to get [Mariners lefty Robbie Ray] before.”

Gomes, who once celebrated a walk-off homer for the 2013 Red Sox by punting his helmet, is still up for celebrating big moments in unique fashion.

This time, he did the Truffle Shuffle after snagging Story’s slam, lifting his red Red Sox shirt up to his shoulders and showing off his stomach.

“I was so fired up, man. At the end of the day, I’m up here like an 8- or 9-year-old,” Gomes said. “I’m a baseball junkie. If I have to go to the bathroom, I’ll run in between innings to get back. This is totally exciting, it really is. This is the jam. The Sox are getting hot. I don’t know how many seats are up here, but these are hands down the best seats in baseball.”

Jackie Bradley Jr, who along with Xander Bogaerts is the only remaining Red Sox player to have teamed with Gomes in Boston, could only chuckle when he saw the video.

There is a feel-good vibe around the Red Sox, who have won three in a row for the first time this season and seven of their last 10.

It is only fitting that Gomes has been around for the resurgent homestand given that he was the master of fun in his two-season run in Boston.

As Gomes continued to spectate his former team, he proudly let the baseball sit on top of an adult beverage can on the shelf of the Monster Seats.

Gomes has been a fan of Story for years and is confident Boston’s recently acquired infielder would fit right in with the bearded wonders of 2013.

“He does have star power,” Gomes said. “He is a star player, but he brings grit every day.”

And these days, Story — who is the fifth Red Sox player in history to have four-plus homers and 11-plus RBIs in any two-game span — is bringing hits along with that grit.

“Wow. Literally a man on fire,” said Bradley. “It’s been fun to watch. He works so hard. And I look forward to continuing to see what he has.”

Contreras leading All-Star vote for NL backstop
Phillies vs. Rangers Game Highlights (6/21/22) | MLB Highlights
What will it take for Denver’s defensive playmakers to earn Pro-Bowl recognition in 2022?
What Makes Adriano Moraes One Of The Flyweight GOATs 🐐👑
Nikita Kucherov injury update: Will Lightning star play in Game 4 of Stanley Cup Final vs. Avalanche?