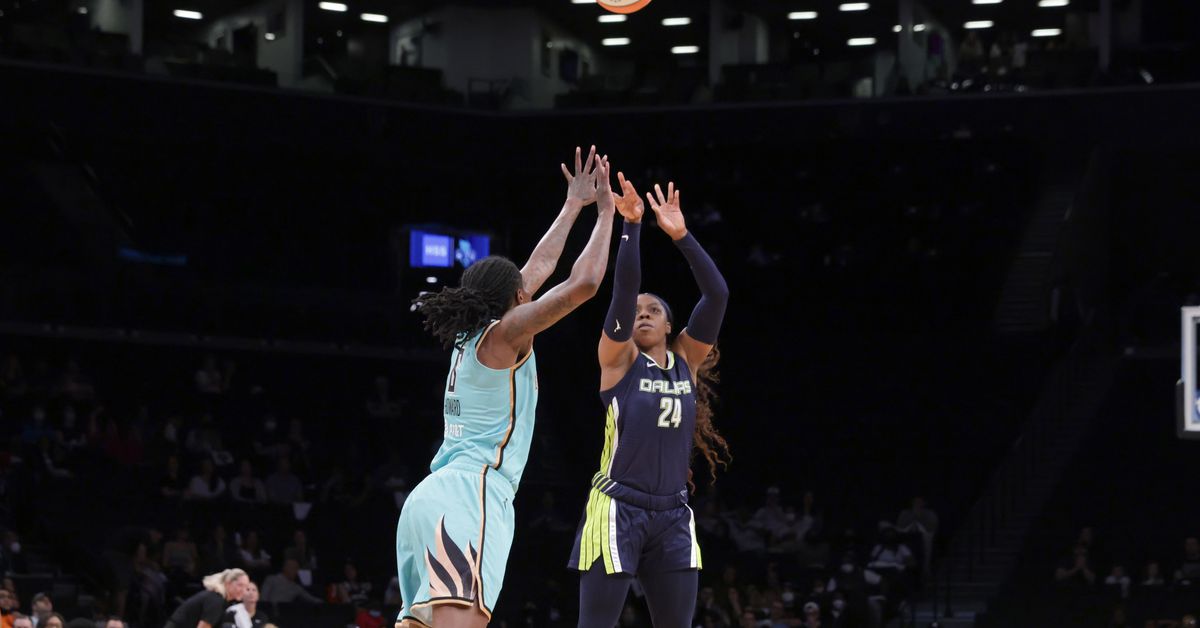 Since defeating a Connecticut Sun team that was without DeWanna Bonner and Courtney Williams to improve to 1-0, things have not gone well for the New York Liberty.

They lost their second game to the No. 1 team in our power rankings, but it was without Kahleah Copper and Allie Quigley playing and by 33 points. Their third game was a loss to an Indiana Fever team that has two wins but is not expected to be a playoff team this year and their fourth game Sunday afternoon in Brooklyn was a loss to a Dallas Wings team that is also not expected to make the playoffs.

The above paragraphs comprise a harsh assessment of the Liberty’s season thus far. Connecticut was the No. 2 team in our preseason power rankings and may have been missing Bonner and Williams, but still had reigning MVP Jonquel Jones, Alyssa Thomas and Brionna Jones. And the Liberty did not have one of their stars in Betnijah Laney in that game. And there is a lot of parity in the WNBA right now. Who’s to say that Indiana (2-3, ninth place) and Dallas (2-1, tied fourth) won’t be in playoff contention down the stretch?

So there’s a more positive way of looking at New York’s situation and either way it is extremely early. But you have to be disappointed if you’re the Liberty because you’re looking at a 1-3 record and missed opportunities to beat a couple of beatable teams.

Dallas finished two games better than the Liberty last year, but I thought New York was the better team on paper and thought they would replace the Wings in the playoffs this year. Yet, in their first head-to-head matchup with the Wings, the Liberty fell short.

Predicting the Liberty to finish fifth in the WNBA, which I did, meant predicting that they would mostly take care of business against the lower half of the league and then use their momentum from last year as an energy guiding them to steal some from the top half. I also chose Sandy Brondello as my preseason Coach of the Year because I knew if the Liberty did finish fifth it would be considered an overachievement and I felt like Brondello’s coaching would be a big part of accomplishing it.

That the Liberty have started 1-3 and sit in a tie for 10th place shows how competitive the WNBA is and how long the team has to go if they want to finish fifth or better. It’s a rough league and nobody seems like a pushover this year. Two teams that finished below New York last year, Los Angeles and Washington, have added All-World players Liz Cambage and Elena Delle Donne, respectively. The other two teams below them, Atlanta and Indiana, have added the first and second draft picks, respectively.

Sandy Brondello is an upgrade over Walt Hopkins. But it will be tough even for a championship-winning coach to lead this team back to the playoffs, let alone fifth place.

Quietly or not, the assists and rebounds always seem to accumulate for Sabrina Ionescu over the course of a game and seem impressive in the box score afterward. That was the case on Sunday, as the third-year point guard finished with six helpers and seven boards to go along with her team-high 17 points. She roughly matched her averages from last year in the assist and rebound columns and provided 5.3 more points. After three games that may be outliers (25 points, two points and 31 points), the Liberty got about what they are hoping to get from Ionescu in the scoring column.

She may not have poured on the points like in those other two games, but 17 is very good and the Liberty can only hope that Ionescu overcoming her struggles from the one awful loss will translate into the team as whole overcoming it’s struggles on this three-game losing streak. It wasn’t time to press the panic button on Ionescu’s season after she scored just two points on 0-of-5 shooting from the field and it isn’t time to press the panic button on the Liberty after four games.

Natasha Howard also had a solid game, going for 14 points, eight rebounds and two blocks and shooting 6-of-12 from the field and 2-of-4 from three to bounce back from a 1-of-15 from the field effort in her previous outing. Betnijah Laney ensured that all three members of the big three had respectable performances, going for 13 points and five assists. Han Xu (10 points) rounded out the Liberty’s double-figure scorers. Xu, a 6-foot-9 center, also reached 10 points in the blowout loss to Chicago.

The Liberty actually outshot the Wings 48.3 percent to 44.4 percent from the field and only lost by 10 points (81-71). Dallas never led by more than 10 throughout the game, but led the entire second half as the Liberty were able to keep it close but just weren’t able to turn the tide.