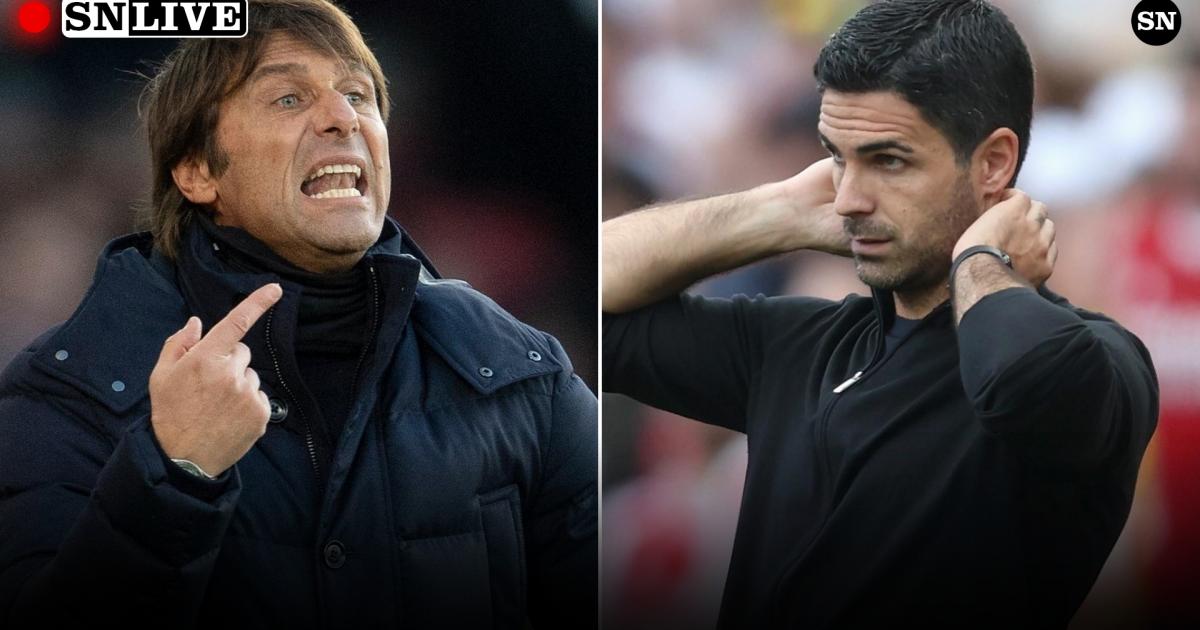 Tottenham and Arsenal usually provide ample entertainment in their Premier League meetings, and the potential significance of the latest edition of the north London derby makes it all the more likely to live up to expectations.

For Mikel Arteta’s Gunners, this is a chance to land a knockout blow with two games of the season remaining once their belated trip to the Tottenham Hotspur Stadium is over.

Spurs start the game four points behind Arsenal, whose position in the final Champions League qualification place of fourth will be unsurpassable for their neighbours should they win.

Victory for Antonio Conte’s side would throw open that coveted fourth spot in the Premier League standings – and Tottenham arguably have the easier of the remaining fixtures, hosting fourth-bottom Burnley before travelling to already-relegated Norwich.

3 mins: Spurs are still being starved of the ball. Arsenal are working hard to close them down when they do have the chance to keep the ball inside their own half.

2 mins: Arsenal are having all of the possession, knocking passes about to a din of boos from the home fans. A fine tackle from Dier on Nketiah ends the striker’s attempt to profit inside the penalty area – and he seemed to go down very easily there, without any contact from Dier.

1 min: Ramsdale advances well outside his penalty to receive a pass rolled back to him by Arsenal from kick-off.

The goalkeeper then tries to launch an attack upfield which fizzles out deep inside territory on the right.

2 mins to KO: Antonio Conte is gazing at the players as they size each other up around the centre circle. ”We have to be better than Arsenal if we want the three points,” he told Sky Sports a little earlier. “We know they are a really good team.”

There is some atmosphere at a full house ahead of arguably the most important game of the 2021-22 season for both sides. We’re ready to go!

5 mins to KO: The players have emerged from the tunnel and are out on the pitch! Here’s how Arsenal looked a little earlier.

15 mins to KO: Lots of encouraging noises as Spurs emerged from their inner sanctum for their warm-up. They really need to win tonight, as a draw would leave Arsenal needing only to win one of their two remaining games – away to Newcastle and at home to Everton – to secure fourth ahead of Tottenham.

30 mins to KO: Arteta has just spoken about Saka’s return, Ben White’s availability and what he makes of a potentially seismic night in Arsenal’s season.

It’s time to grab a pre-match word from the boss 👇#TOTARS pic.twitter.com/xfqUZTMhdI

45 mins to KO: Here’s how the teams line up! Tottenham make one change: Davinson Sanchez starts and Cristian Romero is not included in the squad.

Arteta names the same team that started the 2-1 win over Leeds on Sunday. Saka was a doubt but starts.

1 hour to KO: Here’s how Harry Kane and Tottenham arrived as they aim to avoid Arsenal doing the double over them this season.

The England captain’s 11 goals in 16 matches make him the top scorer in the history of this fixture.

1 hour 15 mins to KO: Ex-Spurs and Netherlands playmaker Rafael van der Vaart knows about this game – he scored four times and provided two assists in four Premier League games against Arsenal during the 2010-11 and 2011-12 seasons.

1 hour 30 mins to KO: Arsenal have arrived! A win tonight would ensure they finish above Spurs in the Premier League for the first time since 2016.

Spurs are on a good home run though, winning four of their last five matches here including a 3-1 victory over Leicester that was as comfortable as the scoreline makes it sound last time out. Their only blip was a limp 1-0 defeat to Brighton & Hove Albion on May 16.

The Arsenal are in the building 🏟

1 hour 45 mins to KO: Son Heung-min figures prominently in this Premier League mini-preview of this game, and the striker has had an exceptional calendar year as well as a record in this fixture that is ominous for Arsenal, with three goals and two assists in his last four derby appearances.

The 29-year-old has scored and been involved in the most goals – 12 and 17 are his numbers for those – of any player in the Premier League in 2022.

He is the second Spurs player to score 20 Premier League goals in a season without any of them being penalties – Gareth Bale is the only previous holder of that accolade, with 21 during the 2012-13 campaign.

2 hours to KO: Hello and welcome to The Sporting News’ coverage of a north London derby that is keenly anticipated even by the standards of this showdown between two of the Premier League’s most familiar and fierce rivals.

When Spurs last hosted this fixture, in December 2020, they were managed by Jose Mourinho and won 2-0 to go top of the table, above Liverpool on goal difference and six points clear of Manchester City.

Gunners boss Mikel Arteta was under a year into his tenure and was in charge of a side who were 15th in the table at the time. Now they can end Spurs’ hopes of qualifying for the Champions League and seal fourth position in the table by winning at Tottenham for the first time in eight attempts.

Their arch-rivals need little more incentive to ensure there is no gloating and move a mere point behind them with three points of their own. Buoyed by an impressive draw at Liverpool on Saturday as part of a run of one defeat in eight games, this is an opportunty for Spurs to show how much they have improved since losing 3-1 at Arsenal in September.

How to watch Tottenham vs. Arsenal

UK: The north London derby is available in the UK on Sky Sports Main Event, and streamed on NOW TV.

USA: Thursday’s match is available in the United States on USA Network (English) and Universo (Spanish), which can both be accessed via fuboTV with a free trial available for new users.

Canada: In Canada the match is available via DAZN on streaming platforms.

Australia: Fans in Australia can watch the match on Optus Sport on streaming platforms.

With so much on the line and often very little to separate the two, it’s a tough one to predict but the betting markets give Spurs the slight advantage as the home side.

As far as how the match might play out stylistically, it’s worth pointing out that the odds favor the over 2.5 total goals and both teams to score. So goals are expected even though Spurs and Arsenal have shown they can defend effectively in high-stakes situations.

Here are the stats to keep in mind: The home team has not lost a match between these two sides in Premier League play since a Spurs home defeat back in March of 2014. That streak spans 15 games, with Spurs winning five (all at home), Arsenal winning four (all at home), and six draws. In addition, no team has won three in a row in this league fixture since an Arsenal run way back in 1987-89, and with the Gunners having won twice on the trot, Spurs could be expected to bounce back.

The lean here is in favor of the hosts and the under total goals with four of the last five north London derbies hosted by Tottenham seeing two or fewer goals. The matches at the Emirates are usually the wilder ones.