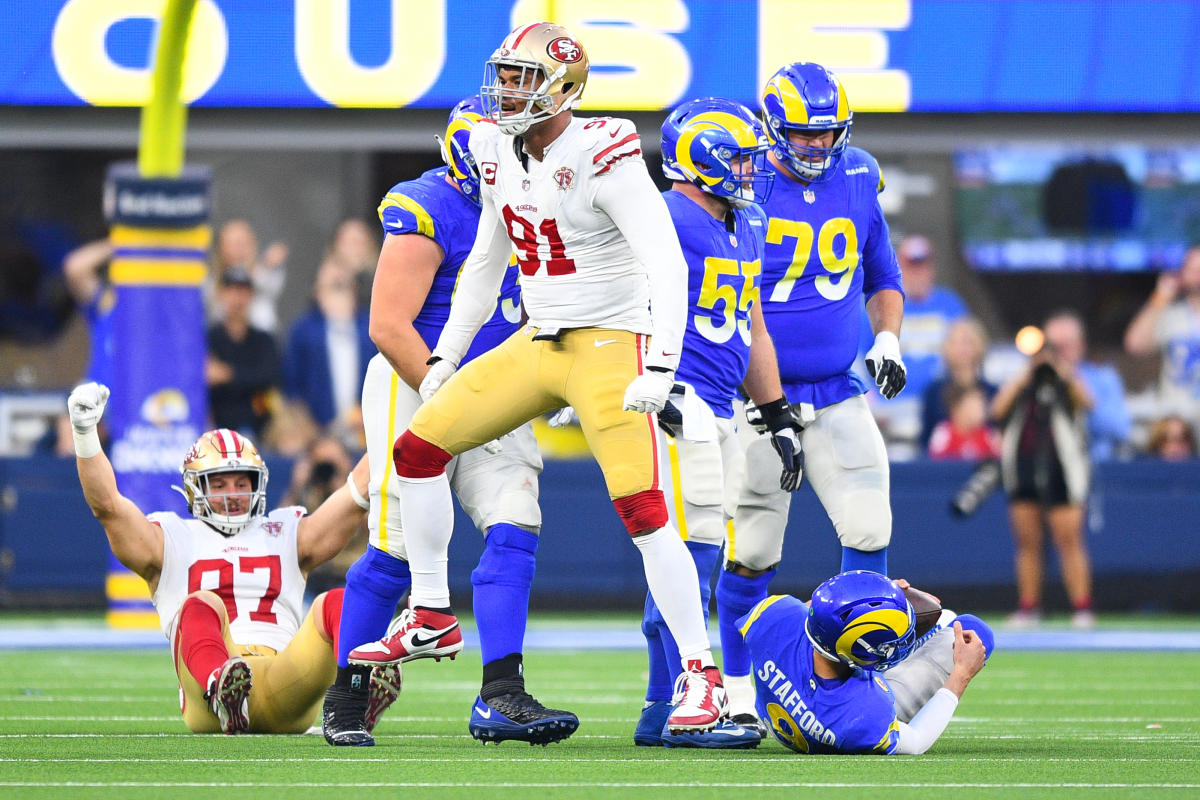 It’s understandable if you like both favorites in NFL conference championship weekend. The Kansas City Chiefs and Los Angeles Rams have looked great in the playoffs.

However, taking both favorites means discounting what happened previous meetings between the teams in the AFC and NFC championship games.

The Cincinnati Bengals beat the Chiefs 34-31 in Week 17. Joe Burrow had 446 yards and four touchdowns and Ja’Marr Chase had 266 yards and three touchdowns. The San Francisco 49ers had even better success against the Rams. The 49ers won 31-10 in Week 10 and then 27-24 in a Week 18 overtime thriller.

Winning one meeting, especially by just a field goal, doesn’t mean you’ll win the next. But take note of it before buying the notion that the underdogs on Sunday don’t have much of a chance. Also don’t buy into the myth that it’s hard to beat a team three times in a season: Yahoo Sports’ Jason Owens wrote about that situation and in 22 chances for one team to beat an opponent for a third time after winning two regular-season games, 14 finished the sweep. That’s a 63.6 percent win rate.

Here are the picks for the conference championship games, with point spreads from BetMGM:

A common refrain this week has been something along these lines: The 49ers aren’t going to win because Jimmy Garoppolo is their quarterback. That doesn’t really add up.

The 49ers have won nine of 11. In that stretch they have road wins over the Bengals, Cowboys, Packers, Rams and Rams again at home. Who do people think was San Francisco’s quarterback was for those games, Steve Young?

Garoppolo started all but one of those games (Trey Lance led a win over the Texans). Garoppolo is the fourth-best quarterback in the NFL’s final four, but football is about more than the quarterback. The 49ers can run the ball very well. They have an elite pass rush and fantastic defense. Deebo Samuel and George Kittle are two of the best playmakers in the NFL and Garoppolo can get them the ball. The 49ers have been fantastic lately with Garoppolo at quarterback and it’s illogical to believe they suddenly can’t win with him now that they’re facing the Rams, who San Francisco beat twice already. Garoppolo’s shoulder injury not being listed on the injury report this week (he’s still on the report for a thumb issue) is even more promising.

The counterargument is that the Rams are peaking. They blew out the Cardinals in the wild-card round. They won at the Buccaneers last week despite four fumbles. They have a ton of talent and maybe it’s all coming together now that the stakes are the highest. The Rams have looked great the past two games, the near-collapse last week aside. They’re perfectly capable of beating the 49ers in the third meeting.

Yet, I will trust that the 49ers’ hot streak, which dates back to Nov. 15, isn’t a fluke. This is a good team. Maybe they’re winning in spite of their quarterback, but they’ve been doing a lot of winning lately.

A three-point win at home, with the Bengals needing a fourth-down defensive penalty to save their final drive, isn’t proof that Cincinnati can beat the Chiefs on Sunday. But it shows the Bengals won’t be scared.

The Chiefs’ defense has improved, but in two of its last four games opposing quarterbacks picked Kansas City apart. Burrow had 446 yards in that Week 17 meeting. The Chiefs were good against Drew Lock in Week 18 and nearly-retired Ben Roethlsiberger in the wild-card round, but then Josh Allen put up 329 yards and four touchdowns. If you take the Bengals, you should feel confident that Burrow and Cincy’s offense can put up points. The backdoor cover will be open, if the Bengals fall behind by double digits.

There is also the possibility of a letdown after the Chiefs won one of the greatest games in NFL history. Tyler Greenawalt of Yahoo Sports wrote about teams coming off a thrilling win, and while it’s not exact, he found that of 67 non-Super Bowl playoff games decided by six points or fewer either in the final minute or overtime, the winning team followed it with a double-digit loss or failed to score 20 points in a close loss 33 times. Even if you don’t buy those outcomes as a bankable trend, the possibility of a Chiefs letdown has to be accounted for. It might not be so easy to come right back after a win like that.

The Chiefs are a very good team and it’s hard to bet against Patrick Mahomes. But the Chiefs’ brand name and Mahomes’ (well-earned) reputation is why the spread is more than a touchdown. The Bengals won’t be intimidated.