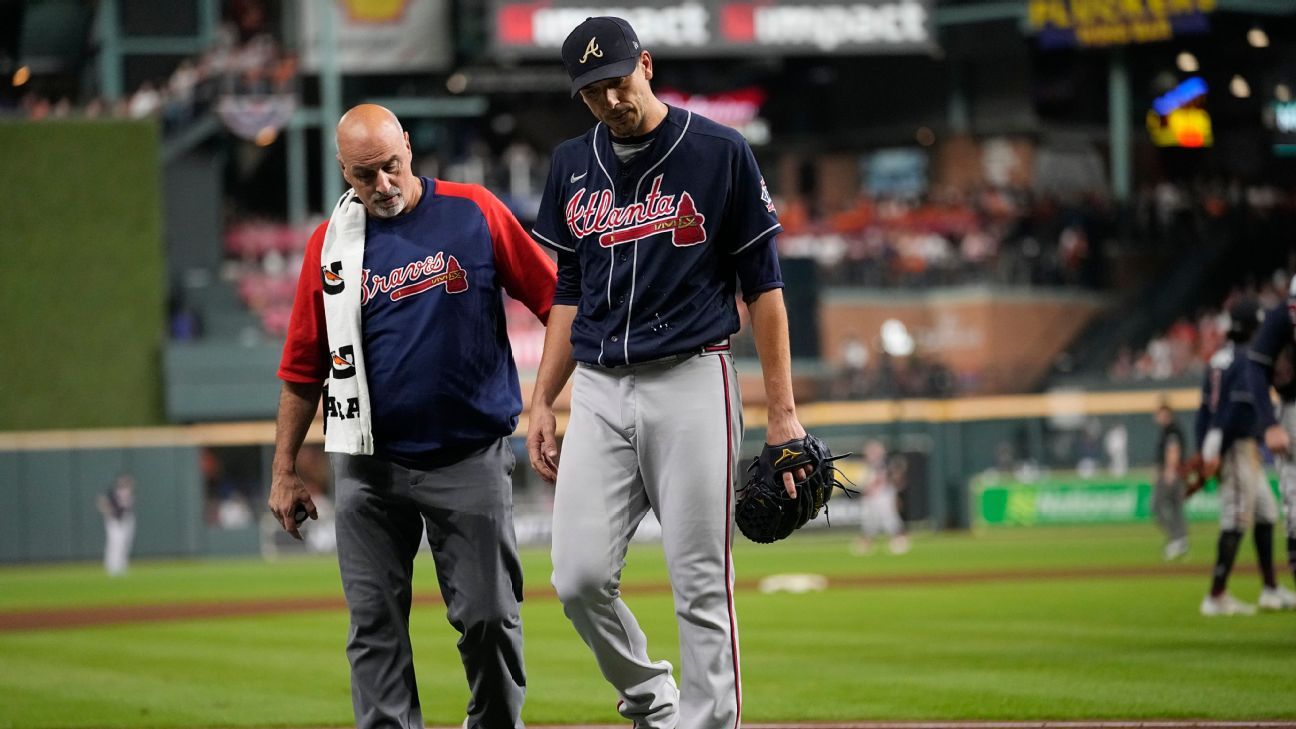 HOUSTON — Inside the training room of the visiting clubhouse at Minute Maid Park during Game 1 of the World Series, friends kept dropping by to apologize to Atlanta Braves pitcher Charlie Morton for his misfortune. His response to them, and to others who reached out and wished him well after a comebacker broke his leg during, was the same: “I’m sorry.”

“And if that doesn’t tell you everything you need to know about Charlie Morton,” Atlanta star Freddie Freeman said, “I’m not sure what does.”

Pain, it’s important to understand, always has been part of Morton’s baseball experience. It’s not something he’d ever wish on anyone else — Morton is legendarily earnest, as his apologies illustrate — but he’s here now, still playing baseball at 37 years old, because of what he learned in the first half of his career, when all he seemed to know was what it felt like for his body to betray him. There were injuries big and little, prime years lost and talent stolen, and eventually Morton started to understand that his job entails coming to terms with a barbaric reality: Throwing a baseball for a living necessitates embracing the hurt.

Still, what Morton did Tuesday night went beyond pain tolerance. The tone he set in Atlanta’s 6-2 victory over the Houston Astros was abundantly clear. He wanted to win a championship so badly that he’d pitch until his body no longer let him. He wanted to do it against the team with whom he won a ring in 2017 and for the team to which he returned this year after nearly a decade and a half away.

“He was doing exactly what we hired him to do,” Atlanta manager Brian Snitker said. “Bring credibility. He did it all year. He did it tonight. And I hate it for him. He really is the kind of guy that would break his leg and say he’s sorry.”

Atlanta signed Morton to a one-year, $15 million deal last November because his wizened arm could still whip 97 mph fastballs and feather 80 mph curveballs, sure. But more than that, it was for the same reason he was so beloved in the Tampa Bay Rays and Astros clubhouses before Atlanta’s: Having Morton around is an exercise in joy and amusement, in seeing someone who bursts with good vibes except for when he’s being self-deprecating.

“He goes eight innings, gives up one run and is like, ‘I’m sorry, guys,’ ” Atlanta catcher Travis d’Arnaud said. “He genuinely, sincerely feels like he shouldn’t have given up a run.”

“Everyone knows his résumé, and his humility is something you wouldn’t expect from someone with that kind of résumé. He’s just so genuine all the time, very open with anything he’s thinking to anybody. Doesn’t matter if you’ve never played a day in your life or you’ve got 20 years in the big leagues.”

This is the reason why so many teammates dropped by the training room Tuesday night. Morton is beloved. He was when he arrived in Atlanta as a 24-year-old after spending seven years in the minors, and he was when Tommy John surgery and hip surgery and shoulder injuries derailed his career, and he is now that’s he’s finally stayed healthy for a few years in a row — culminating this season, in which he tied for the National League lead with 33 starts and was characteristically dominant in most.

Braves starter Charlie Morton takes a comebacker to his right leg in the second inning and is forced from the game an inning later.

At first, Morton didn’t look particularly wounded by the 96-mph fastball that Yuli Gurriel, the American League batting champion, ricocheted off Morton, bouncing to Freeman for an easy out. Morton acted like it was nothing. He struck out Chas McCormick on four pitches. He threw six more to Martin Maldonado, occasionally grimacing but perhaps no more than in an average Charlie Morton start, during which his faces are regularly amusing.

Between innings, an X-ray machine in the stadium snapped an image of Morton’s leg, and the diagnosis was: no break. It hurt, but his shoulder and elbow and hip hurt once upon a time, too, and he pushed himself through those. This was the World Series. Even though Atlanta thinks so much of Morton it already signed him to a $20 million extension for 2022, nobody can predict what’s to come. Maybe this was his best chance at a title. Discomfort wasn’t going to stop him from returning.

So back he came for the third inning, where he threw six pitches and caught Altuve staring at a curveball for the second time, only after this one he pirouetted away, a grimace creasing his face, and avoided landing on a ginger leg that 30 minutes, 39 seconds earlier had been ambushed by Gurriel.

“It’s incredible that he even thought of going out there, and I bet you it was so A.J. could have some more time to get ready,” said d’Arnaud of A.J. Minter, the reliever who spelled Morton with a season-high 2 2/3 innings. “He sacrificed himself.”

There is something about this Braves team and how it responds to injuries. In the middle of the year, it lost Ronald Acuña Jr., one of the best players in baseball, to a torn ACL – and got better. Tuesday, relievers needed to get the final 20 outs against a devastating Astros lineup. It worked in Game 1. With Morton out for the rest of the World Series (a second X-ray, after the third inning, revealed the fibula fracture), the prospect of multiple bullpen games going forward makes the path even more difficult.

That’s why Morton was sorry. Not for anything he did actively, of course, but because Gurriel’s bat happened to hit his pitch at a negative-6-degree angle and the cut of the grass and swing of his leg conspired such that the latter ended up in a boot. He was sorry that he went only 2 1/3 innings, because he expected more than that.

There was no bloody sock to memorialize Game 1, nothing tangible beyond Morton becoming quite literally a Sorry Charlie. In the end, there’s just the hope that the guy who kept pitching until his leg broke will have a gold-and-diamond ring to show for it.