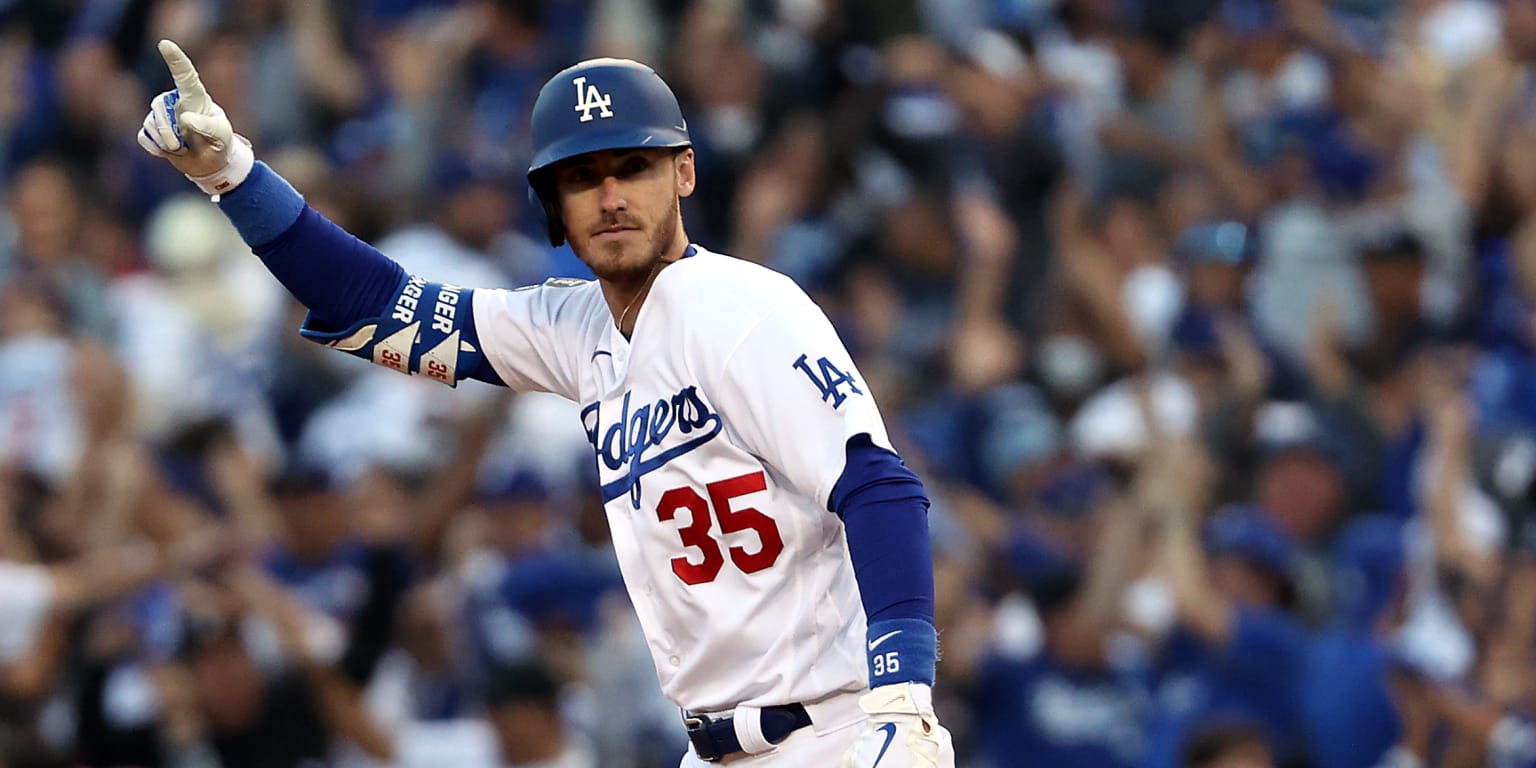 LOS ANGELES — Cody Bellinger put his head down and took his best swing. He put the barrel of his bat on a Luke Jackson 96 mph fastball that was above the strike zone. For seconds, which for some felt like an eternity, a nearly sold-out Dodger Stadium awaited the result.

When the ball finally landed in the right-field bleachers, Bellinger stopped just shy of first base, looked back at the Dodgers’ dugout and raised both of his arms. For a moment, he said he couldn’t hear or see anything. It was all a blur. As he slowly jogged past second, he could see the joy coming from his teammates, so, naturally, he lifted his right arm up and flexed again.

With the Dodgers’ season on life support as they stared at the possibility of a 3-0 series deficit, Bellinger delivered a game-tying three-run blast in the eighth inning. Three batters later, Mookie Betts followed Bellinger’s heroics by lacing a go-ahead double into right field to lead the Dodgers to a 6-5 comeback win over the Braves in Game 3 of the National League Championship Series.

“We were dead in the water, you could see it,” said Dodgers manager Dave Roberts, whose club has now beaten the Braves in 13 of their past 14 meetings at Dodger Stadium. “Then to hit a homer, it just flipped everything. We’ve got a very good ballclub, but we just needed that kind of shot in the arm.”

Teams ahead 2-1 in all best-of-seven postseason series have gone on to win the series 101 of 143 times (71%). The Dodgers, however, would much rather play with those odds than to try to join the 2004 Red Sox as the only team to erase a 3-0 deficit and win.

The version of Bellinger that was smiling and slow-trotting around the bases in celebration is much different from the player who grinded through the most challenging season of his life. Just two years removed from an NL MVP Award, Bellinger posted a career-low .165 average. At times, Roberts said Bellinger doubted if he would ever get another hit.

“He was at rock bottom,” Roberts said.

Most of Bellinger’s struggles were a product of dealing with injuries. He missed half of Spring Training after undergoing arthroscopic surgery on his right shoulder, sat out two months with a fractured left fibula, and played the last week of the regular season with two fractured ribs.

As he navigated through all that, Bellinger saw his swing, the one that helped him become an MVP and a household name, become compromised. He struggled hitting high velocity up in the zone. During the regular season, Bellinger hit .143 (8-for-56) with 27 strikeouts against pitches 95 mph or above, tied for the ninth-worst average by a hitter with at least 50 plate appearances. Tired of his struggles, Bellinger finally sought help.

Before the Dodgers began a four-game series against the Cardinals in early September, Bellinger went up to the hitting coaches and asked what he needed to change in order to finally see results. Changing your mechanics isn’t an easy task for any player, especially near the end of the season. That didn’t matter to Bellinger. He was tired of letting his team down and agreed to make a change – he lowered his hands, even if that meant likely sacrificing some power.

“I think he knew he had to,” Dodgers hitting coach Brant Brown said. “We tinkered with it a few times, but it’s something that changes his intent right out of the get-go, allows him to have a little shorter swing, allows him to do things like he did today.”

Fueled by his adjustments, Bellinger has been a completely different hitter in the postseason. He drew a key two-out walk before Chris Taylor’s heroics in the NL Wild Card Game against the Cardinals. Bellinger then came through with the game-winning hit in Game 5 of the NLDS against the Giants. On Tuesday, he smacked the biggest hit of the Dodgers’ season to date. He is now 3-for-5 with a homer on pitches 95 mph or higher in the postseason. Bellinger has also recorded six RBIs this postseason. He had five over his last 29 regular-season games.

Through the first seven innings on Tuesday, L.A. looked flat. Walker Buehler endured the shortest start in his postseason career, allowing four runs in 3 2/3 innings. Gavin Lux misplayed a catchable ball, and Corey Seager also couldn’t stop the bleeding during a four-run fourth, failing to make a play that would have helped Buehler wiggle out of trouble.

On the other end, the Dodgers’ offense continued to struggle. Seager got them started with a two-run homer in the first inning, but they couldn’t pile on despite forcing Braves starter Charlie Morton to throw 34 pitches in the opening frame. They were 0-for-2 with runners in scoring position through seven innings, putting them at 2-for-20 in such situations in the series. Justin Turner and Trea Turner were a combined 10-for-70 at the time.

Heading into the eighth inning, the Dodgers had a 6% chance to win, according to Baseball Savant. They were five outs away from a 3-0 deficit that only Roberts’ ’04 Red Sox team has been able to erase.

But then Will Smith and AJ Pollock started a rally with a pair of singles. That set the scene for Bellinger, Betts and Kenley Jansen, who struck out the side to secure the save with a 1-2-3 ninth, to give the Dodgers some new life heading into Wednesday’s Game 4 with left-hander Julio Urías on the mound.

“You’re feeling his struggles, and he was rock bottom with confidence,” Roberts said of Bellinger. “But he didn’t quit fighting and competing and working. The game honors you. And the game honored him today.”