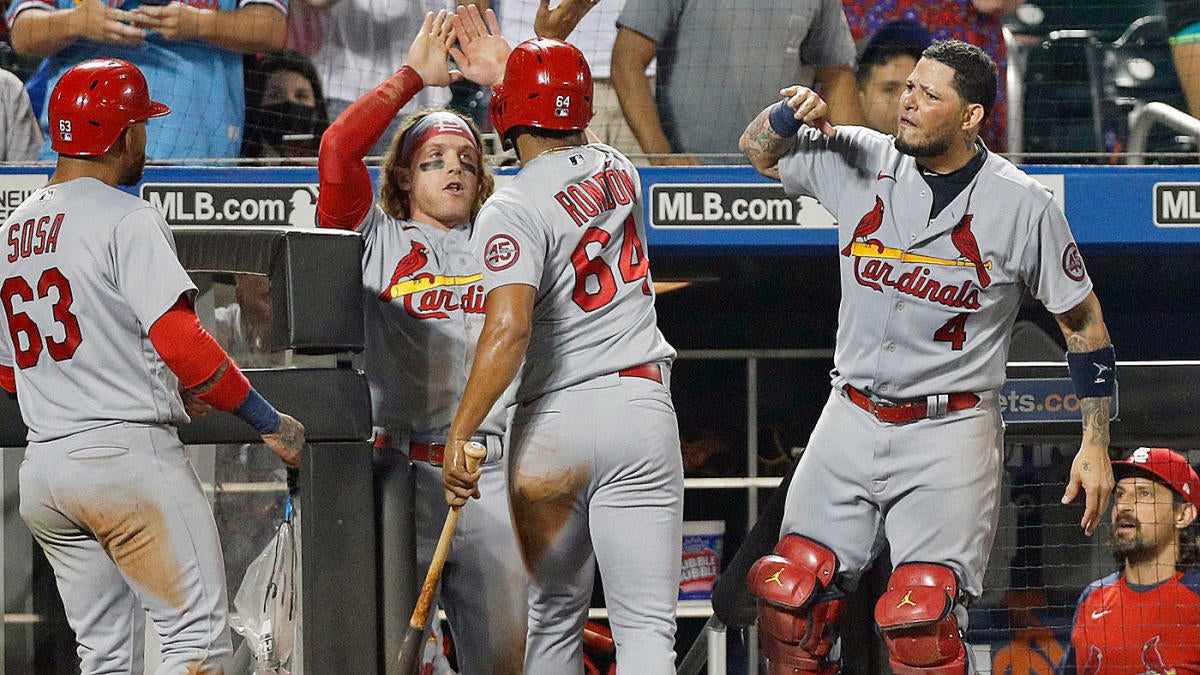 The Cardinals eked out a 7-6 win over the New York Mets in 11 innings on Tuesday night (box score), and as a partial consequence St. Louis now finds itself in sole possession of the second NL wild card spot.

In Queens, the Cardinals appeared to be on the verge of a crucial loss, but Tyler O’Neill in the eighth inning turned a one-run deficit into a one-run lead with one swing:

That’s O’Neill’s 26th homer of the season. That score held until the bottom of the ninth, when Javier Báez ambushed a first-pitch fastball from Giovanny Gallegos and powered a game-tying homer:

Báez, as it turns out, is no stranger to this sort of thing, at least when the Cardinals are the opposition:

The Cardinals were able to escape and force extras. They weren’t able to plate the automatic runner in the top of 10th, but in the home half the Mets got automatic runner Kevin Pillar — the potential winning run — to third base with one out. Cardinals manager Mike Shildt countered by swapping out Dylan Carlson for José Rondón, who functioned as a fifth infielder. Jonathan Villar walked on a borderline pitch, and that brought Francisco Lindor to the plate with an opportunity to be the walk-off hero for the second time in the past three games.

That’s a not-often-glimpsed 3-2-5 double play induced by Alex Reyes and turned thanks to the quick decision-making of Paul Goldschmidt, who could’ve tried for the tag play on Villar at second but instead focused on keeping Pillar where we was. Pillar, though, got snared in a rundown, and that ended the Mets’ threat.

In the top of the 11th, the Cardinals pieced together four singles to take a 7-4 lead. The Mets in the bottom of the 11th, though, once again made things taut and interesting, as they plated two and got the potential tying run to scoring position with two out. The Cardinals, however, escaped with the win:

The Cardinals have now won four in a row and six of their past seven. As you would expect with such a to-and-fro game, the win probability chart is a wild one:

That St. Louis win in tandem with the Reds’ loss to the Pirates earlier Tuesday and the Padres’ loss to the Giants later in the night means that the Cardinals are now in sole possession of the second and final NL wild card spot by a half-game over both Cincy and the Padres. San Diego once had what seemed like a firm grip on the berth of note, but a 21-30 mark in the second half has allowed the field to catch up and surpass the Pads.

Moving forward, the Reds would seem to have an advantage in this tightly bunched fray because their remaining schedule is substantially easier than St. Louis’ and vastly easier than San Diego’s. In part that explains why, coming into Tuesday’s slate, the SportsLine Projection System gave each of these teams the following chances of winning the second wild card:

For now, though, the Cardinals are on top, and those percentages have shifted slightly to their benefit. There’s no true greatness here in terms of the quality of teams involved, but it could still be a great race for the final spot. Tuesday’s baseball events at Citi Field reminded us of that.