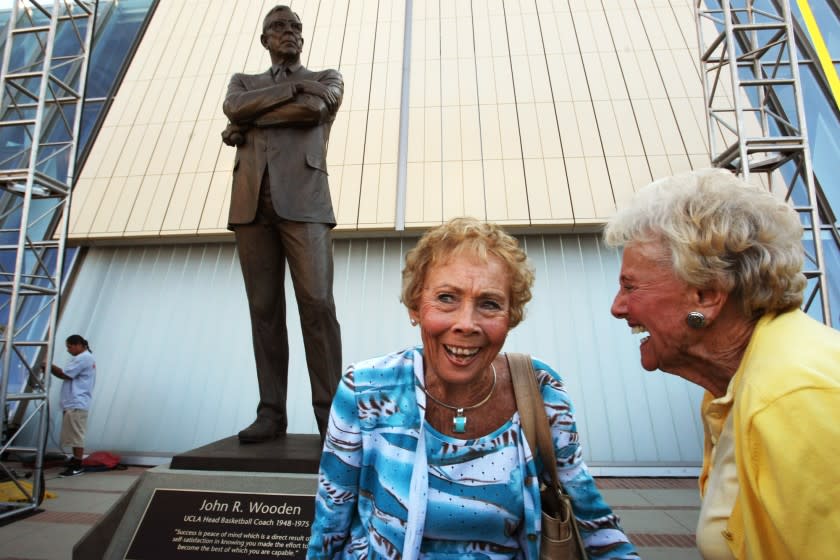 Long after her father coached for the final time inside the old building, Nan Wooden continued attending UCLA basketball games at Pauley Pavilion.

She loved the Bruins every bit as much as her legendary father, who guided the program to a record 10 national championships. After John Wooden died in 2010, Nan would often occupy his favorite spot behind the team bench in Section 103B, Row 2, Seat 1.

Nan was there when Tyler Trapani, her grandson and a walk-on who had never scored a point in three seasons, grabbed an airball and banked it through the net in February 2011 during the final seconds of a game against Arizona. It was the last basket scored at Pauley Pavilion before it was closed for a $136-million renovation.

“Watching this was one of the greatest moments of my life,” Nan said after the game. “Knowing the connection between Tyler and his great-grandfather made this perfect.”

Before a series of strokes confined her to a San Fernando Valley care center, Nan had represented her family whenever she could at awards ceremonies, luncheons and games.

Born in Kentucky in 1934 and raised in Indiana, Nan moved with her family to Southern California when her father accepted the UCLA job before the 1948-49 season. John Wooden’s Bruins went 149-2 in Pauley Pavilion before his retirement following the 1974-75 season, when his team won the national title with a victory over Kentucky in San Diego.

Sampson impresses again in 2022 audition
Waiver wire pitcher pickups for last week of fantasy baseball season
College Football Playoff expansion meeting may not be held as resistance to process grows
Doc Rivers wants to change Ben Simmons’ mind: ‘We’re not gonna give up’
In The Making: Embarrassing Moments | Pittsburgh Penguins In The Room