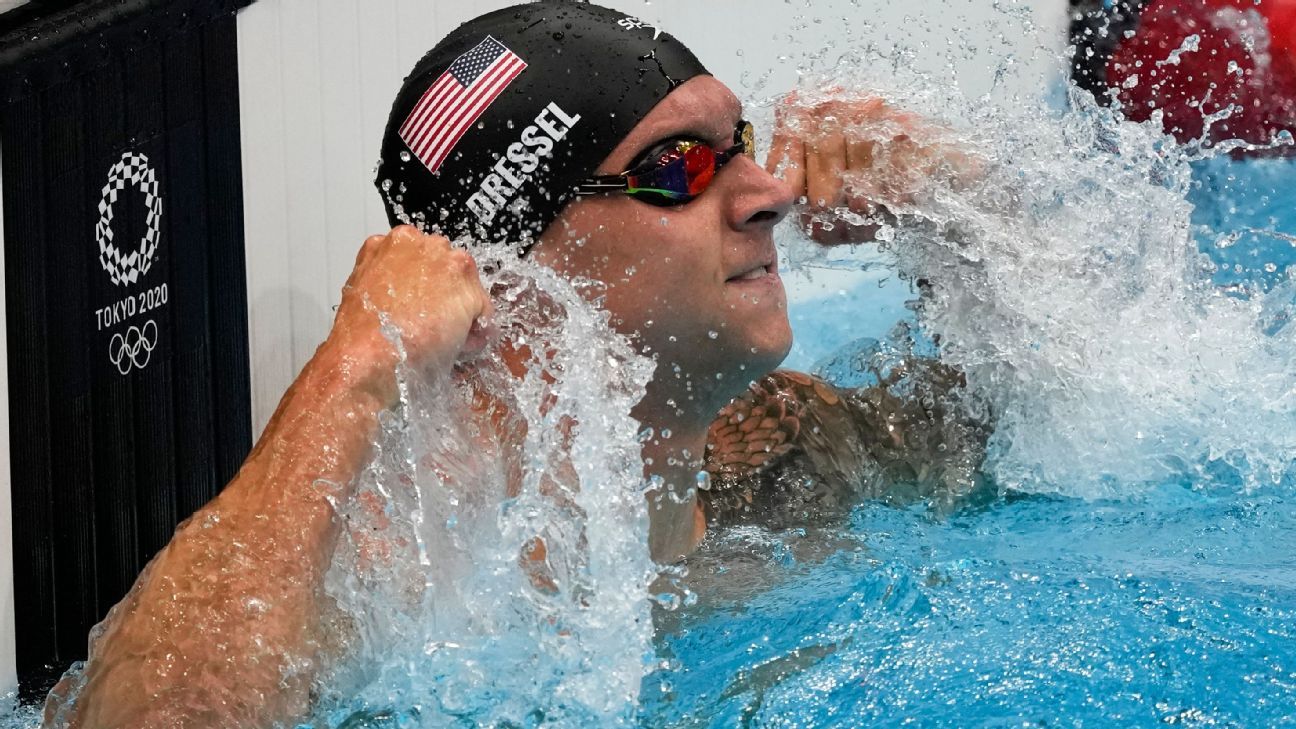 And in perfect fashion. Every time he propelled his arms forward in the men’s 50-meter freestyle final, he was competing against a world-record mark that moved along with him.

He finished the race in 21.07 seconds Sunday in Tokyo — an Olympic record. He missed the world record by .16 seconds. Nobody else even had a chance.

He touched the wall and looked up with satisfaction. Dressel took gold in all three individual events he competed in at these Olympic Games. His 50-meter freestyle win was the largest margin of victory in Olympic history — men’s or women’s — at .48 seconds.

Dressel’s 3-for-3 effort means he becomes only the third man to win gold in three individual swimming events at one Olympics, joining Michael Phelps and Mark Spitz.

He added two more golds in relay events for a total of five in Tokyo, including the 4×100 medley relay on Sunday. Just over 75 minutes after Dressel dominated the 50, he came out and swam the butterfly section of the medley to help Team USA win gold in a world-record pace. An emotional Dressel hugged teammates Ryan Murphy, Michael Andrew and Zach Apple after the race, which they won in 3:26:78.

Brilliance. That’s the best word to wrap up Dressel’s Tokyo Olympics performance. Every time he heard the words, “Take your mark, get set, go,” his back muscles tensed and he dove into the air — somehow always landing in the water a little ahead of every other swimmer in the race. He unmistakably took the lead in every race in the first 15 meters, his deep underwater dolphin kick too powerful for any other competitor to challenge.

There’s a reason for that — Dressel watched videos of dolphins so he could mimic their body movements under water. He moved his entire body in a wave-like motion, just like a dolphin.

And, every time, it paid off.

Dressel was in an interesting position going into Tokyo: He was the favorite to win every sprint event even though he had never won an individual Olympic gold medal.

Somehow, he took on the role of a rookie and a veteran and made it look easy.

The first individual final — the 100-meter freestyle — was all about proving himself to the world. He “felt the weight of the world on his shoulder,” he said after. He was up against Britain’s defending champion, Kyle Chalmers, and when Dressel touched the wall, he looked up to see that he had beaten Chalmers by 0.06 seconds. An Olympic record.

Caeleb Dressel sets the 100M Free Olympic Record and his family’s reaction is EVERYTHING. #TokyoOlympics pic.twitter.com/vwiYZMJ85J

He cupped his mouth with his palm, shocked and relieved that the first big event — the first Olympic gold — was his. And in the poolside conference after, the tears came, as memories from the past year came crashing on him. It has been a hard year, he said. It still was, with him having to go through his Olympic journey in Tokyo alone.

“Right now I am just kind of hurt. It’s a really tough year,” he said at the poolside interview after the race. “It’s really hard. To have the results show up — I am happy.”

The 100-meter butterfly on Friday was almost a mirror image of the freestyle final. He led in the first 15 meters, and then he sprinted to the finish line, with Hungary’s Kristof Milak right next to him almost the entire way.

And this time, a world-record swim: 49.45. Two days after setting the Olympic record, he one-upped himself.

Dressel might have made it look easy once he jumped off the diving board, but in the waiting room beforehand, he had to talk himself down, he said.

“I was telling my brain to shut up, because it was a little bit annoying,” Dressel said. “And I did. Again, that’s not going to hinder me from executing what my race plan is. It doesn’t mean I’m not going to be able to have good technique throughout the entire race. It’s just going to be a little harder, and that’s the fun part.”

And that was just the beginning of the biggest day of racing for Dressel. He finished the race, participated in the medal ceremony, then ran to the warm-up pool to get ready for the 50-meter semifinals. He came out about 30 minutes after winning the gold, and obliterated the field, finishing first in 21:42.

“Mentally, it actually got a little easier each race, which is really weird to say,” Dressel said after. “I was a little out of sorts in the ready room for the fly. This sport was a lot more fun when no one knew my name, to be honest. So I was a little shaky.”

Then, about a half-hour later, he came back out again and swam anchor in the first-ever mixed-relay event at the Olympics. The U.S. finished fifth, after an unfortunate goggles incident — Lydia Jacoby of Alaska, who swam the second lap of the relay, had her goggles come off as soon as she jumped in the water — and Dressel had more than eight seconds to make up in the last lap of the race.

The first — and only — race that didn’t end perfectly for Dressel.

As Dressel said, he is a much different swimmer than Michael Phelps, but his Tokyo Olympic run comes closest to Phelps’ Athens Olympics run in 2004. Phelps was in a similar position to Dressel — he finished fifth in the 200-meter butterfly final in the 2000 Olympics in Sydney — and went into Athens as a favorite, but also as somebody who needed to prove himself. And he walked away with four individual gold medals and two team medals, just one more than Dressel at Tokyo.

He came in as a rookie, and walked away as a breakthrough star — a veteran even.

And Dressel is in the same position.

Five golds in a single Olympics, drawing comparisons to Phelps.

Dressel is now a seven-time Olympic gold medalist — three individual and four relays in the past two Olympics. He is the fifth swimmer to win at least five gold medals in one Olympics, joining the list with Phelps, Spitz, Kristin Otto and Matt Biondi.

“I’m fine if people want to compare me to him,” Dressel said in a “Today” interview this week.