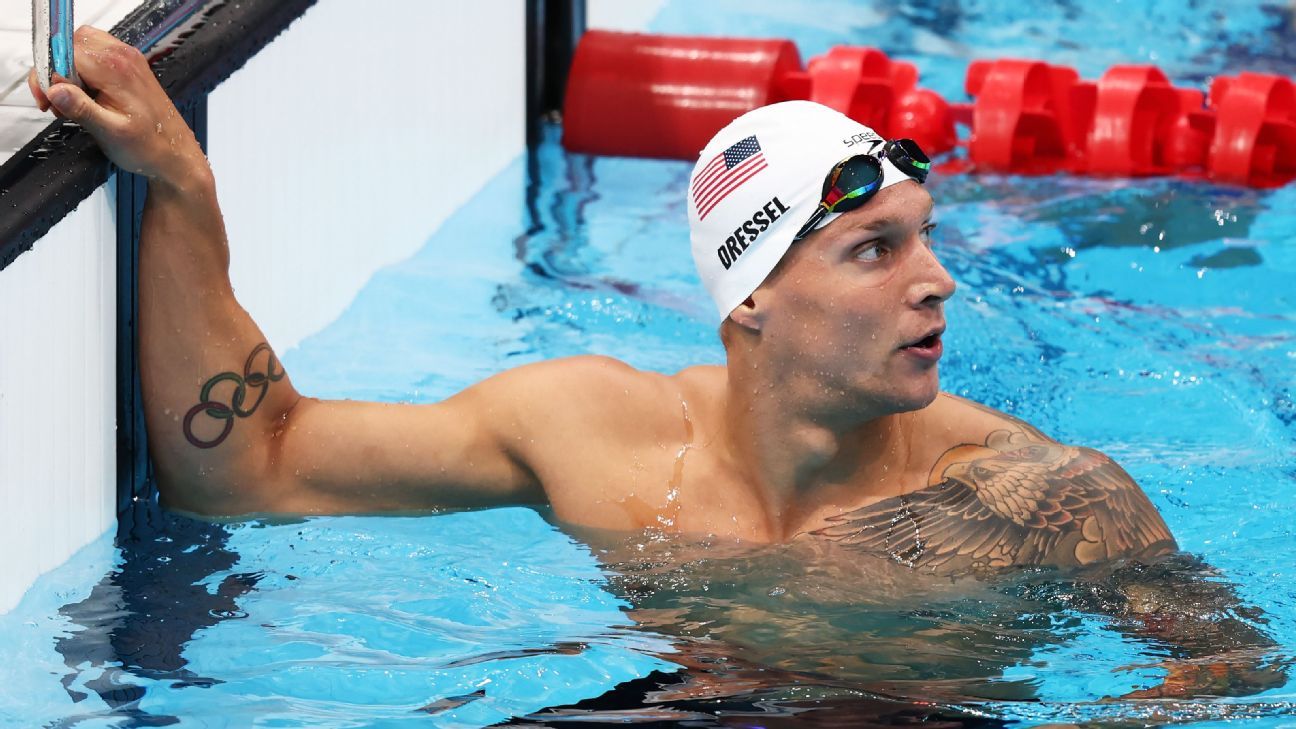 TOKYO — At an Olympics where some of America’s biggest stars have faltered, Caeleb Dressel lived up to the hype.

As is his style, Dressel dove into the pool and came up with the lead. He was still ahead at the lone flip and turned away the Aussie’s bid for a second straight gold.

“It means a lot,” Dressel said. “I knew that weight was on my shoulders.”

Dressel’s winning time was an Olympic record of 47.02 seconds, a mere six-hundredths of a second ahead of Chalmers, who earned a silver medal at the Tokyo Aquatics Centre.

The bronze was claimed by Russian Olympic Committee swimmer Kliment Kolesnikov (47.44), who added to his silver in the 100 backstroke.

The first three gold medals of Dressel’s career were all in the relays: two in Rio de Janeiro, another in the 4×100 free relay at the Tokyo Games.

Now, Dressel has earned a gold all by himself.

“It is a lot different. I guess I thought it would be, I just didn’t want to admit to it,” he said. “It’s a lot tougher. You have to rely on yourself, there’s no one to bail you out from a bad split.”

Dressel climbed atop the lane rope, a look of wonder on his face, and held up the index finger on each hand — No. 1 indeed.

Dressel’s gold was the second of the morning for the Americans, who got a surprise victory from Bobby Finke in the Olympic debut of the men’s 800 free.

He turned in staggering performances at the past two world championships, earning seven gold medals at Budapest in 2017, followed by a six-gold, two-silver performance at Gwangju in 2019.

As important as those meets were, they’re not the Olympics.

He needed an individual gold to solidify his legacy.

“These moments are a lot different than worlds,” Dressel conceded.

Finke pulled out his victory with a dazzling burst on the final lap.

Germany’s Florian Wellbrock snatched the lead from Italy’s Gregorio Paltrinieri on the final flip, with Finke lurking back in fourth.

But the American turned on the speed at the end of the 16-lap race, passing all three swimmers ahead of him to take the gold. Finke’s final 50 was 26.39 — nearly 2 seconds faster than anyone else.

“I had no idea I was going to do that,” Finke said. “I noticed with 10 meters off [the final turn] I was catching a little bit of ground, and that was the only motivation I needed.”

Finke’s winning time was 7 minutes, 41.87 seconds, just 0.24 ahead of Paltrinieri. Mykhailo Romanchuk of Ukraine touched in 7:42.33 to take the bronze, knocking Wellbrock back to fourth.

Over two swims, Finke knocked about 6 seconds off his personal best coming into the Olympics to walk away with a historic gold.

He wasn’t thinking about the pain until he touched the wall.

“Your mind just kind of disappears and you’re blocking it out at the end,” Finke said.

The men’s 800 freestyle was added to the Olympic program for these games, marking the first time that approximate distance was contested by the men since there was an 880-yard race at the 1904 St. Louis Games.

Mirroring Finke’s finish, albeit over a much shorter distance, Stubblety-Cook rallied on the final lap to pass Arno Kamminga of the Netherlands, who started fast and tried to hold on.

The winning time was an Olympic record of 2:06.38, giving the team from Down Under its fifth gold of the swimming competition — and its first men’s breaststroke gold since Ian O’Brien at the 1964 Tokyo Games.

Stubblety-Cook was surprised as anyone to be standing on the top step of podium.

“I was happy enough just to be here,” he said. “Honestly, I’m just pretty lost for words at the moment. It’s still all sinking in.”

Dressel’s victory pulled the Americans ahead of the Aussies with six golds in Tokyo. They also led the overall medal tally with 20.

Kamminga was under world-record pace through the first 150 meters, but he faded to the silver in 2:07.01. The bronze went to Finland’s Matti Mattsson in 2:07.24.

Zhang turned in a dominating performance to win China’s first swimming gold of these games in the women’s 200-meter butterfly. Her Olympic-record time of 2:03.86 put her more than a body length ahead of the pair of Americans, Regan Smith and Hali Flickinger.

The U.S. swimmers dueled back and forth for the silver, with Smith pulling ahead at the end to touch in 2:05.30. Flickinger earned the bronze in 2:05.65.

Smith, whose best stroke is the back, was thrilled to claim a medal in the fly.

“I was just super surprised,” she said. “I really fought hard.”

In the final event of the morning, China surprised the U.S. and Australia with a world-record performance in the women’s 4×200-meter freestyle relay.

Katie Ledecky took the anchor leg for the Americans in third place, nearly 2 seconds behind the Chinese and also trailing the Aussies. Ledecky passed Australia’s Leah Neale and closed the gap significant on China’s Li Bingjie, but couldn’t quite catch her at the end.

Li touched in 7 minutes, 40.33 seconds, denying both Ledecky and Ariarne Titmus another gold medal. After winning both the 200 and 400 free individual titles, Titmus led off for Australia in the relay.

It was the first swimming world record of the Tokyo Games — in fact, all three medalists broke the previous mark of 7:41.50 set by the Aussies at the 2019 world championships.

“I wasn’t as nervous maybe and knew I was going to let it go and go for it each lap of that race,” Ledecky said.

The Associated Press contributed to this report.

Giants vs. Rockies Game Highlights (9/24/21) | MLB Highlights
The Jump | WOJ report: Zion could leave after he issues with Pelicans date back to rookie season
Kane confronting new round of allegations
Hussey: Russell said ‘he felt something pop in his leg’
Oregon star launches his own cryptocurrency