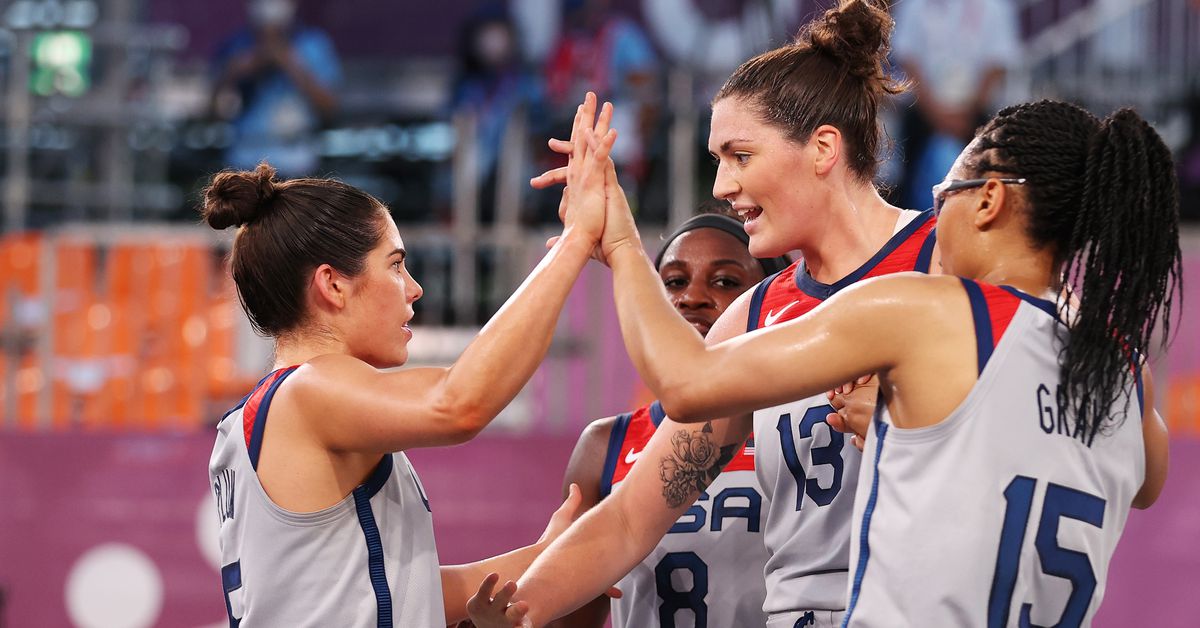 Against France, a 5-0 run from 4:17 remaining to 2:15 remaining took USA’s lead from 9-8 to 14-8 and it led by at least four the rest of the way. Stefanie Dolson, who led the team with seven points and six rebounds, made a layup to make it 10-8. Ensuing baskets from Jackie Young (one point, four rebounds) and Dolson pushed it to 12-8 and Kesley Plum (six points, one assist, one block) capped the run with a 2-pointer.

After a couple of France scores cut it to 14-0, USA went on a 3-0 run to close out the contest, starting with a Plum layup. Allisha Gray (three points, five rebounds, two assists, one block) then made a nice lob pass inside to Dolson for a layup that made it 16-10 with 55 seconds to go. Dolson capped the scoring with another layup 12 seconds later, exemplifying the fast pace of play.

USA opened the game with an 8-4 lead, which featured a deep Plum two that made it 4-3 USA one minute and 34 seconds in. Plum scored three of the first eight USA points, as did Gray, who barely missed a tough layup with 6:34 to play and made the free throw she was awarded to make it 8-4.

France went on a 4-0 run after that to cut it to 9-8. Mamignan Toure (three points, one rebound) scored the final three points of the run, including a two at the 4:17 mark.

Marie-Eve Paget also had three points for France to go along with her three rebounds, one assist and one block. Laetitia Guapo added two points, five rebounds and one assist while Ana Maria Filip was good for two points and four boards.

Both teams made just two 2-pointers, but France attempted 17 to USA’s six. USA was 12-of-18 one 1-pointers (Dolson was 7-of-8) while France was 6-of-16. USA won despite turning the ball over eight times compared to France’s four miscues.

In USA’s second game, a Dolson layup with exactly three minutest to go ended the game because USA reached 21 points first. Gray (two rebounds) was the team’s leading scorer in this one with nine points while Dolson went for five points, seven rebounds and three blocks.

USA went up 3-0 early and Gray made a deep two to make it 4-1. That was followed by back-to-back Dolosn blocks, a Dolson free throw and another two from Gray that made it 7-1. Gray also opened the scoring with a two and was 4-of-5 from beyond the arc in the contest. Her final two made it 13-2 USA with 5:41 to play.

USA also went up 17-4 and 20-5 before Chimeddolgor Enkhtaivan (six points, five rebounds, 3-of-6 from distance) made back-to-back twos in a desperate effort to save the game for Mongolia. It was not enough as Dolson ended the game 22 seconds later.

Kelsey Plum tossed in six points for USA to go along with two rebounds and an assist. Jackie Young scored one point and grabbed four boards.

USA made six twos compared to three for Mongolia and outshot Mongolia 58 percent to 25 percent on 1-pointers. It also outrebounded Mongolia 19-11.