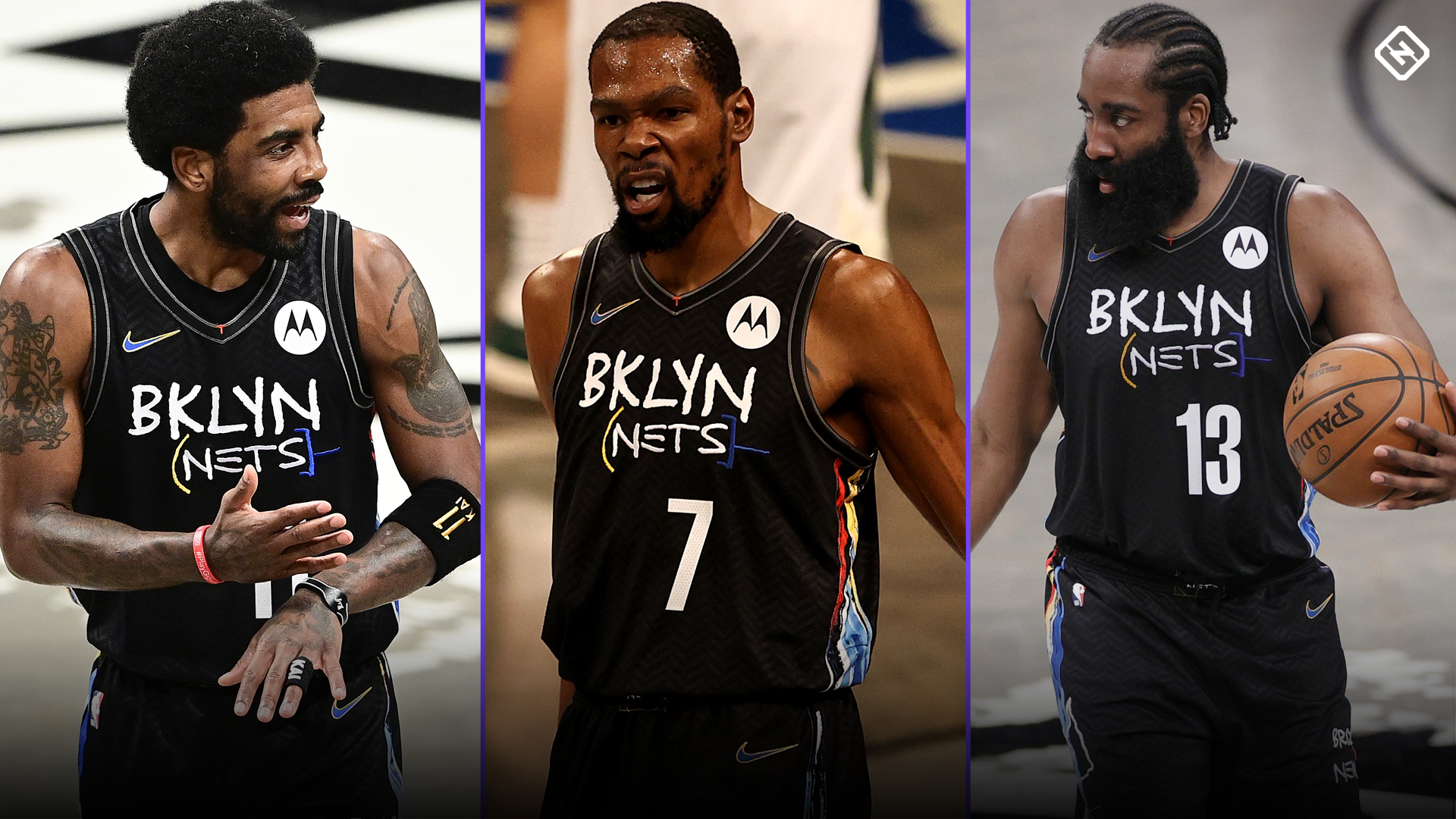 Following the 2018-19 season, things were looking up for the Nets. Kenny Atkinson was proving to be a great coach for the team, and they had vastly exceeded expectations. Their squad, led by D’Angelo Russell, Spencer Dinwiddie and Caris LeVert put together a 42-40 season to make the playoffs in the Eastern Conference.

While Brooklyn was eliminated in the first round of the playoffs by the 76ers, it was clear that they were an ascending team. And in time, their young talent could make them a future contender in the East.

However, instead of following their growth-and-development-based blueprint from before, the Nets saw a chance to get aggressive. It began during the 2019 offseason and has continued over the course of two years.

Now, the Nets are one of the most talented teams in the NBA. And that’s with just two members of their 2018-19 roster still in the fold.

How did they get here so quickly? Here’s a look at the moves that accelerated the Nets’ rebuild and turned them into a three-star juggernaut.

The small moves that began the Nets’ rebuild

Before getting into the big moves that reshaped the Nets organization, it’s important to look at the little moves that Brooklyn GM Sean Marks made to put this rebuild into motion.

Marks did a great job of finding players off the NBA scrap heap while the Nets lacked capital as a result of the ill-fated Kevin Garnett/Paul Pierce trade that sent the picks that would become Jaylen Brown and Jayson Tatum to the Celtics. Despite lacking early first-round picks, Marks was able to atone for Billy King’s mistakes and landed several quality pieces in the draft and in free agency.

Brooklyn’s best moves during that time under Marks included the following:

Harris and Dinwiddie are the only members of the ’18-’19 Nets roster that is still with the team. Harris was originally acquired as a free agent. He was traded from the Cavaliers to the Magic after the 2016 season and the Magic waived him. Harris shot a league-high 47.5 percent from the field during the 2020-21 season and has shot 41.9 percent or better in four of five years with the Nets.

Meanwhile, Dinwiddie averaged 20.6 points and 6.8 assists per game during the 2019-20 season and was expected to be a key sixth man this year before tearing his ACL. Before joining the Nets, he spent time with the Pistons and the Bulls’ G-League affiliate, so Marks did well to get him on the cheap.

2019: Kyrie Irving, Kevin Durant take their talents to the Nets

The 2019 NBA free-agent class was one of the strongest in the history of the league. There were three top talents available that year: Kawhi Leonard, Kevin Durant and Kyrie Irving. The Nets ended up landing two of them.

How the Nets got Kyrie Irving

Irving was the easiest piece for Marks and the Nets to get. The veteran point guard was an unrestricted free agent and the Nets had the cap space needed to sign him to a max deal.

At the time, Irving was disgruntled with Boston and wanted a change of scenery. He also wanted to be closer to home after the death of his grandfather during the 2018-19 NBA season. That made Brooklyn the natural choice for the New Jersey native. So, he inked the four-year, $136.5 million contract in free agency, with no sign-and-trade necessary.

How the Nets traded for Kevin Durant

Durant’s situation was a bit more complicated. The team could’ve signed Durant straight up, but they opted to pull and sign-and-trade to send Russell to the Warriors. The trade netted the Nets an extra first-round pick, top-20 protected.

As it turned out, the Nets didn’t receive that first-round pick, as the Warriors bottomed out and received the No. 2 overall pick that year. But it was still a worthwhile move by Marks and Brooklyn to grab another asset.

Other moves from the Summer of 2019

Durant and Irving were the major acquisitions for Brooklyn, but there were a few other ones of note, too.

On draft day, the Nets swung a deal that landed them Taurean Prince from the Hawks. They sent Nickeil Alexander-Walker, Allen Crabbe and a 2020 first-round pick to get Prince and a second-round selection. That gave them a cheap starter and opened up cap space for them to utilize in their efforts to get Irving and Durant.

Both Irving and Durant expressed a desire to play with DeAndre Jordan, so the Nets signed the veteran center to a deal worth just under $40 million over four years That helped secure the commitments of Irving and Durant.

Finally, the Nets also extended the aforementioned Caris LeVert via a three-year deal worth $52 million. He was envisioned as a key part of the team’s future, but that level of compensation also made him an attractive mid-priced trade candidate.

Brooklyn didn’t do much during the 2019-20 season to improve their roster because they were a bit cap-strapped, Durant wasn’t available due to the Achilles tear he suffered with the Warriors and the COVID-19 pandemic reared its ugly head.

But starting during the 2020 NBA Draft, the Nets made a couple of big moves that positively impacted their team.

During the 2020 NBA Draft, which was held in November, the Nets agreed to a three-team deal with the Pistons and Clippers in an effort to bolster their bench. The deal featured a lot of players and picks, but here’s a run-down of the deal with the assets the Nets gave up bolded.

Bey looks like he’ll be a good player at the NBA level, but Brown emerged as a quality defender and key role player off the bench for the Nets. Meanwhile, Shamet has provided value as a shooter with Perry serving as a solid rebounder. In short, they filled out their back-end roster depth with better options than what they sent out in Hands, Scrubb and Musa.

Brooklyn had little money to spend in free agency, but they made their one acquisition count. They gave 34-year-old forward Jeff Green a one-year deal worth just over $2.5 million with designs on using him as a long defender and small-ball center.

Green averaged 11 points per game for the Nets during the ’20-’21 regular season and shot a career-high 41.2 percent from beyond the arc.

The Harden move is what put the Nets over the top. The veteran became unhappy with the Rockets, so Houston was eventually forced to trade him. In the end, Brooklyn made the best offer and was able to swing a four-team deal to land Harden.

To get Harden, Brooklyn cashed in on some of their previous value pickups and signings that had value across the league. Here are the trade details with what the Nets gave up in bold.

This move gave the Nets three legitimate superstars, and they were able to get there because they tapped into some of their assets. Obviously, the first-round picks they gave up were a big part of the Harden deal, but solid starters and role players like LeVert, Allen and Prince helped facilitate the deal and open the cap space needed to make that happen.

After coming to the Nets, Harden averaged 24.6 points, 8.5 rebounds and 10.6 assists per game and helped take pressure off Durant and Irving as they all battled injuries during the season.

Landing Blake Griffin and LaMarcus Aldridge on the buyout market

Because of the Nets’ solid core and good depth, they were able to attract two of the best buyout candidates on the open market to join their team: Blake Griffin and LaMarcus Aldridge.

Aldridge, unfortunately, had to retire after dealing with complications from an irregular heartbeat, but the fact that the Nets were still able to scoop him up as one of the most coveted players on the market was a good sign for the team.

Marks didn’t have an easy job when he took over the Nets GM post, but the way that he and his staff have managed to turn this roster over while building up depth and an explosive offense is impressive.

And when you look at the two rosters compared to one another, it’s amazing that these changes have taken place over the span of just over two years.

Durant and Irving being willing to sign in Brooklyn may have been a bit of luck, but make no mistake: Marks and Co. have done a great job of shaping this roster into a contender.

And it’s not just because of their marquee signings.